All is set for the 5th National Philippines Skimboarding Open Competition at the Skimboarding Capital of the Philippines, Tanauan, Leyte, Mayor Agapito Pagayanan Jr. said. 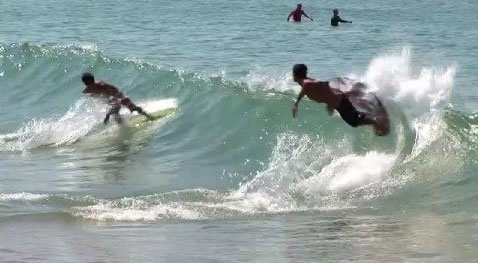 The Philippines Skimboarding Open Competition is scheduled to be held on December 27-30 at the Bantay Dagat Area in Barangay Sto. Nino in Tanauan, Leyte.

Mayor Pagayanan clarified that the holding of the Competition in December was thought of, four years ago, because it is believed that there are better waves in December and so the skimriders will enjoy the competition better.

It may be recalled that the Skimboarding Competition has usually been conducted on Easter Sunday, when there are many beachcombers visiting the shores of Tanauan.

However, since four years ago, the National Skimboarding Competition has been held in December, after Christmas and right before New Year.

The participants for this season’s competition are being limited to to make the competition easier and more manageable. The Mayor added that skimriders from Luzon. Visayas and Mindanao, have signified their intention to join the competition.

The 5th National Philippines Skimboarding Competition will formally kick-off on December 27 but the nightly activities at the Site will start on December 20 as the local government decided to hold the annual Kaadlawan Festival there.