Several dozen skimboarders from New Jersey to North Carolina showed up here Saturday, put on Halloween costumes and worked the edge of the surf for the annual Sea Witch Skim Fest.

The event has become a fall tradition and Jason Wilson and Corey Mahoney have been running it for three years — picking up where Wilson’s Dad, Harry, left off. 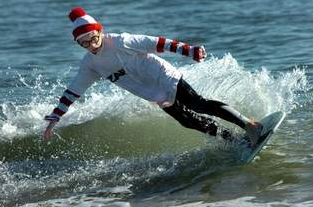 Harry Wilson also pioneered other costumed water sports including the Ho-Ho Surf Off, which was held just before Christmas.

Wilson and Mahoney own Alley-Oop Skim Inc., a company that sells skimming gear and operates a summer skimboarding camp.

Wilson said they decided to carry on with the costumed Halloween skim competition as a fun way to keep people in the water even as the weather turns cooler.

The business partners were dressed as bacon ( Mahoney) and egg (Wilson).

Elvis had left the building before he could be interviewed by the press.

But Michael Jackson was up for some media attention.

John O’Connor, 13, of Wilmington used his black wetsuit as the lower half of a Jacksonesque outfit with the military-style black jacket as a topper. He wore the longish black wig, black hat and aviator sunglasses to round out the effect.

Competing in costume “is a little harder because it gets in your way,” O’Connor said.

But in this case, the costume was a little easier — except for the hat, wig and glasses — because it worked with the wetsuit, he said.

Not so fortunate was Shawn Kenny, 17, of Kill Devil Hills, N.C. He was dressed as a sumo wrestler — complete with an on-board air pump to give him that oh, so massive look.