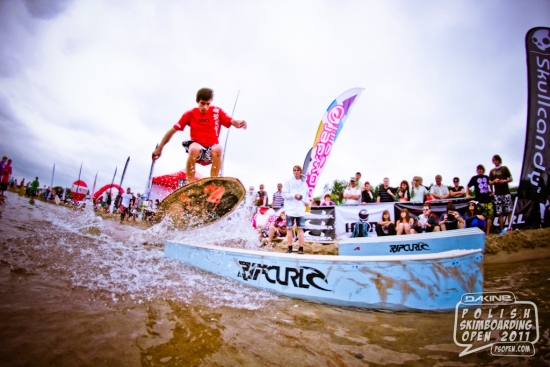 DAKINE Polish Skimboarding Open 2011 is already over. In a nutshell – everything was higher, better, faster, stonger than anything skimboarding has seen before before.

View all of the PHOTOS from the contest | Click Here

“The whole event had a great atmosphere. It was the result of people, level of the competition, music and organization. The system of qualiﬁcations and the ﬁnals in form of a jam session plus increasing difﬁculty of boxes in every round is the perfect solution. Because of specific and exclusive atmosphere made by contestant motivating each other and rising level of tricks – just as it suppose to be – I had a lot of joy from the start in each round. Noone was questioning decisions of judges or organization of the event – everyone was pleased with their results. I’ve seen many skimboarding competitions all over Europe and what I experienced last weekend exceeded it all. Polish Skimboarding Open attracts attention across the international skimboarding scene, and with no doubt the event next year should be not Polish, but European Skimboarding Open! After all, it’s the biggest and the best such event at the continent.” said German skimboarder Daniel Preiss. 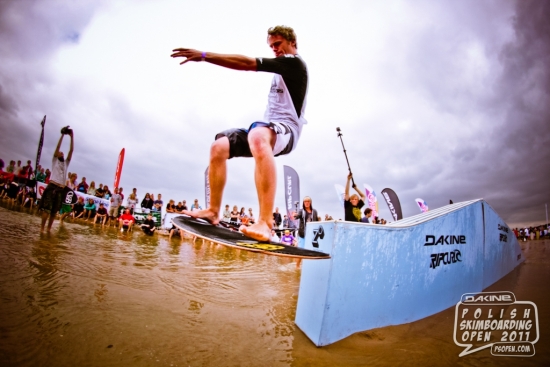 The riders really showed the highest level of their skill and presented a spectacle on the global level. Despite the terrible weather forecast we managed to avoid the cold, wind and rain and the only drawback were cloud,s which occasionally brought out a bit of sun. The audience, slightly intimidated by morning aura, over time convinced to visit skim-test town and support riders.

After Friday’s qualifying round there were the 36 best riders in the quarterfinals and 8 girls in female competition. Over the day skimboarders presented their skills in front of the audience and the judges on several different conﬁguration of boxes, including a very technical, “ollie-in” and the monstrous ﬁnal kinked-box. The level of tricks presented in the semifinals level was so high that no one could imagine what more to expect in the final round. 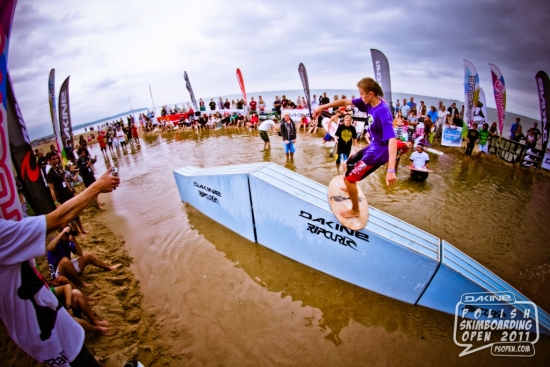 In the ﬁnals one could see kinked-box of unusual dimensions (1.30 meters high and over 7 meters long) built specially for the occasion and the best 10 riders of the day. It all has got into the making of a truly breathtaking show. Polish audience had hoped that 2010 vice-champion Tomek Wojciechowski who has confirmed the anticipations and outclassed rivals in the pursuit for victory. Second place went to young Grzegorz Bemowski , who proved how important and appreciated by the judges the style is. Last on the podium was Daniel Preiss from Germany who in previous year ended his participation just in semiﬁnals. All the German riders, who came in larger number than a year ago, has made very positive surprise with their skills. It was evident that they trained hard for this year’s PSO, which gave them places 3rd, 4th and 6th in 2011 ﬁnals.

“I can honestly say that this year’s edition was as big success as previous edition of PSO. Deﬁnitely the best event of the year, both in terms of organization and the level of tricks. Already in the semiﬁnals one had to give the best of self, because guys were not letting go. I was ittle bit afraid of the ﬁnal box,because I have never seen such a juggernaut before, even in the movies. But we managed it and I hope that next year the organizers will surprise us as innovative construction.” summed up the event a reigning Champion of Poland – Tomek Wojciechowski. 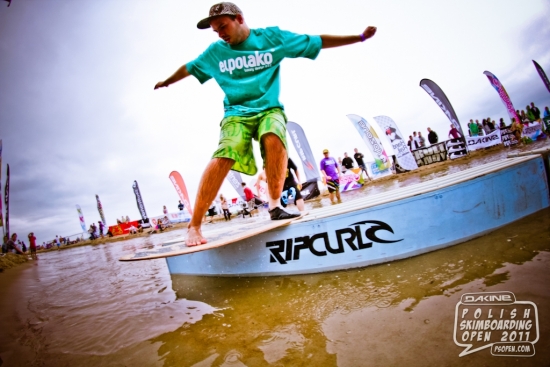 Girls, although in the minority, also successfully attracted the attention of the whole audience and the vast majority of the riders themselves. Girls without a doubt, improve their skills from one year to another, so that their struggles are more interesting. The “dark horse” of the contest was Gabrysia Kulka from Gdansk, who has not competed in any major event before PSO. This is living proof that the open formula makes it possible to ﬁght as equal regardless of age, practice or origin. Anyone can win only if proves to be the best on that day in this place.

In the evening in Sopot’s Beach Club Kongo the ofﬁcial After Party took place with riders and visitors. During the whole event there was an opportunity to skim on the track within the Rip Curl Night Session. Night atmosphere and ambiance made the strongest and the most resistant compete until 1 AM, which was not left unrewarded.