History was made this year with the Women’s Pro expansion in the UST. It has been an exciting tour with all of us on our toes wondering who will be the first ever female world champ to take the title. As most of you know, 26-year old Keiao Gucwa-Bucasas has won! Enjoy! 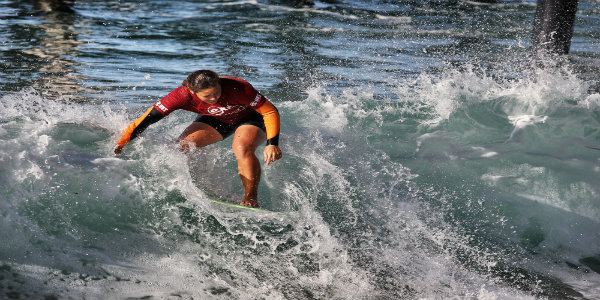 Q: Let’s start off by asking, how long have you been skimming?
A: It’s been about seven years now since I first started skimboarding. I was 19 years old and in my second year of college on Oahu. Learning how to skim was just a trial and error kind of thing. When I would ask for help all I could get out of most people was “just do it.” It’s true though because you can get as many pointers and tips as you want but when it comes down to it you still have to figure it out yourself to understand how it all works.

Q: You currently live on the island of Oahu, describe the skim scene in Hawaii for those of us who have never been.
A: The skim scene in Hawaii is very minimal. There are only a handful of skimboarders that live on Oahu but you’ll find a lot more on Maui. Hawaii is known for surfing so that’s what everyone does but we can still get some pretty fun shore break waves here in the islands.

Q: Congratulations on becoming the first female UST world champ! How does it feel to be included alongside Austin Keen in the UST ranking as world champ?
A: It’s another thing I get to smile about. It was exciting to hear earlier in the year that there would be a women’s division for the UST. What I thought was great was that there were a lot of girls who made it to at least two or all three of the contests. The tour gives all the women something more to strive for other than just a contest win.

Q: How did you celebrate winning the title? For those curious, did you win anything?
A: Sushi and sake bombs, enough said. (I didn’t win anything that I know of.)

Q: The UST announced 3 stops for women’s pro ranking for 2013. Tell us a bit about your experiences competing at these stops; The VIC, OBX and ending the tour off recently with Oktobertfest.
A:The VIC seems to have that prestigious factor to it. It’s a contest that everyone tries to make it out to. The waves at Aliso can get pretty intense. You have to know what you’re doing or things can turn bad real quick. Every year that I’ve attended someone has had to go to the hospital. This was the first year I made it to OBX and I had a blast. I had so much fun with those waves because we don’t get lines like that in Hawaii. It’s fun to ride something different. Oktoberfest always has this feel good vibe to it. The contest environment is fun and somehow there always seems to be waves.

Q: Progressing the sport each year is ideal, in your opinion what stops can be included for professional women in the 2014 United Skim Tour?
A: It’s tough to say. Expanding the tour to include more stops along the east coast and possibly internationally would be ideal. However, I think for us to progress the sport for the women we need to build up the skim scene and get more women involved before expanding. I thought competition wise this year was a great year for the women who participated. I think we’re definitely off to a good start.

Q: You did some traveling this summer for contests, where did you go and give us some contest highlights?
A: I was able to make it out to California twice this year for the VIC and Oktoberfest. I am just happy that I was able to walk home with another win at the VIC this year. I also traveled a little farther to get to the east coast for the OBX contest and I took a trip to Japan to attend the Terasawa Girls Festival. The Japanese skim scene is just awesome. Everyone is so stoked on skimboarding it’s such a good feeling to be around.

Q: How many contests did you compete in total?
A: This year I competed in 4 contests.

Q: Any travel plans in the works for the 2014 contest season?
A: I’ll definitely try to make it back to California for the VIC and Oktoberfest. Cabo has been on my list but I’m not sure if next year will be the year.

Q: What do you love about competing and about the sport overall?
A: The best part about competing isn’t competing. For me it’s about getting to see everyone and skimming. The best thing about this sport is the people. I’ve made so many friends skimming it blows my mind. You can pretty much travel the world and have a place to stay because of skimboarding. 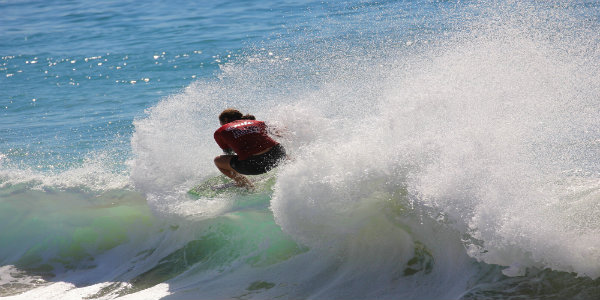 Q: You are sponsored by Exile Skimboards; a board company many young shredders would love to be sponsored with. What do you love about being sponsored?
A: I think I’ve been sponsored by Exile for at least four years now. Exile has supported me and treated me well ever since they allowed me to join their team. I’ve even been able to travel with them on a couple trips to Japan and Taiwan and it’s been a blast. The best part of being sponsored is just that feeling of being a part of the team. They support skimboarding so much and I’m so fortunate to be able to be apart of them.

Q: What board do you ride?
A: I have been riding a pro shape board with a little less rocker for at least a couple years now.

Q: Many young girls desperately wish to be sponsored. What advice and encouragement do you have for groms, as one of the handful of sponsored females in the sport?
A: Work for it. Set the bar high. Give them a reason to want to sponsor you.

Q: If you have dealt with criticism, pressure or negativity on the beach, what advice do you have for our future pros to stay positive and motivated to compete?
A: You have to be happy with whatever you do in life. People will always have something to say but it only matters what you think. You chose what you let into your life and you also chose how you live it. Love what you do.

Q: What is your favorite trick?
A: Three shovs.

Q: How do you pay your bills?
A: In order to pay my bills I help people help themselves to fly to cool places around the world.

Q: Tell us something we may not know about you?
A: I love Gyoza (an Asian dumpling filled with meat and vegetables) and mango.

Q: What are some of your 2014 skim goals?
A: My main goal for 2014 is reclaim my skim stoke. It’s something I’ve been struggling with for the past few years with injuries and what not. I’ve started having fun again and it’s something that I look forward to next year.

On behalf of myself and all of your fans, thank you Keiao for taking the time to be interviewed. It is an honor and privilege. This is a good time to end the interview, with a surprise from your sponsor Exile Skimboards, “For a long time we have thought that Keiao was the best female skimboarder in the world. We couldn’t be happier to see her make it official by winning the first ever Women’s UST title. She is an awesome person in and out of the water and a great role model for female skimboarders everywhere. Way to go Keiao!”