A Vancouver dog with a talent for skimboarding partook in the 2011 Rose Bowl Parade on New Year’s Day.

Porter, an eight-year-old Jack Russell terrier, was scouted to take part in the parade by California resident Ron Davis, who spotted the dog skimboarding in YouTube videos posted by his owner Justin Pang.

As the owner of one of the most famous dogs in the world, Davis knows talent when he sees it. Davis owns bulldog Tillman, the fastest skateboarding dog in the world. Tillman, who also snowboards, showed off his skills in Vancouver during the Olympics. 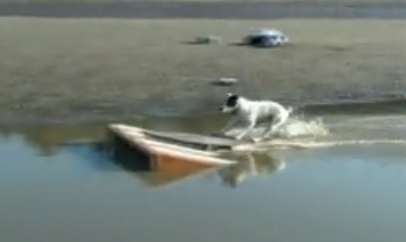 During the Rose Bowl Parade, Porter will join Tillman on the Dick Van Patten Natural Balance float, Pang said in an interview. The theme for the double-decker float is Havin’ a Splash, and it will feature more than 4,000 gallons of water and weigh 35 tonnes.

Highlights of the float include five competitive, dock-jumping dogs leaping into a pool of water nine-feet wide and 21-feet long. At the end of the float, Tillman and his bulldog sidekicks Rose, Lyle and Sully — as well as Porter — will be skimboarding in a pool below the jumping dogs.

Porter was one of 10 dogs chosen out of 100 from across North America to be on the float. Natural Balance is also claiming a Guinness world record this year for the world’s heaviest float.

Pang, who works from his downtown home as an Internet ad designer, said he and his friend John Minns flew with Porter several months ago to attend the Natural Balance auditions in California after an invitation from Davis.

Porter was so consistent there was no need for him to attend a recent training session.

Pang bought Porter from a Burnaby breeder when the puppy was four months old. Porter was not only the runt of the litter, but had spotted ears and a tail that’s docked too short, unpopular traits in Jack Russell terriers.

The first time Pang went skimboarding at Spanish Banks with Porter he realized the little dog had a passion for the sport. When Porter continually tried to jump onto the board with Pang or Minns, they decided to teach him how to ride solo. Now, if Pang wants to skimboard he has to leave Porter at home because the dog is so fast he always beats his owner to the board.

Porter is the official mascot of Vancouver-based skimboard company Kayotics, which supplies the dog with his boards. Porter uses the same skimboard Pang does, the OG Large.

Pang won’t accompany Porter to California for the parade, but he plans to watch for his dog on TV. According to the schedule, Porter will skimboard along a one-mile stretch of the parade where the majority of broadcast cameras will be filming.