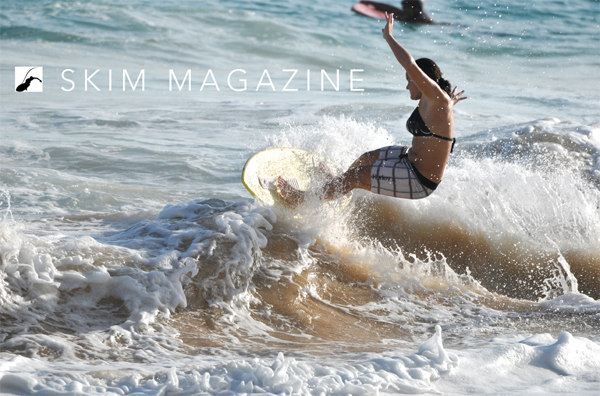 Ann Keiao Gucwa-Bucasas is a 26-year old skimboarder who was raised on the island of Kauai, HI. She has lived in Connecticut for the last three years of high school and then she moved back to Hawaii for college.

How long have you been skimming?
This will be my seventh year now.

Where do you skim normally?
You’ll find me at Sandy Beach.

Who do you skim with?
I skim with my buddy Travis Tsuda

What is your favorite skim spot?
On Oahu I’d have to say my favorite spot would be Yokohama Bay

Where have you traveled to skimboard?
I’ve traveled to the west and east coast of the US and a couple different places in Japan.

Where do you want to travel to skim?
I’m scared, but one day I’d like to make it out to Cabo.

What board(s) do you ride?
I ride an Exile Pro shape 3/4 inch carbon fiber board along with a Dude! Cruise

Do you wave skim? Flatland? Both?
I just wave skim. I’m afraid to flatland.

Do you compete?
I try to compete when I can.

If so, what competitions have you competed in?
In 2012 I competed in a handful of Hawaii contests, Santa Cruz Skim Bash, Victoria WCS and Exile Skimboards Oktoberfest.

And what are some of your contest highlights?
I have to say winning Oktoberfest in 2010 and 2012 was awesome along with winning the Vic WCS 2012.

Do you have any sponsors? What companies?
I am Sponsored by Exile Skimboards.

What other board sports do you partake in?
I used to snowboard and skate but my knees hurt too much to keep up.

Where do you see the skimboarding going in the future?
Well I hope to see it grow somewhat and see a more standardized format when it comes to contests.

What riders influenced your skimboarding?
I still have to say Aaron Fujimoto played a role in not only getting me into the skim scene but also keeping me in it.

If you were stranded on a desert island that already has a plentiful resource of skimboards what three things would you bring?
3 friends, haha.

What makes you happy?
I would have to say just getting out in the water with my friends makes me happy.

If everyone rode a skimboard would the world be a better place?
Haha I’d like to say yes however I think there are some people in this world that just aren’t meant to skimboard.

What skimboarding goals do you have?
Recently, I’ve been focusing on a lot of other aspects of my life which has caused me to veer off a little from skimboarding. My goal is to get back into it and enjoy it.

What is your favorite skimboarding trick?
I can’t do many tricks so I have to say 3 shov, haha.

Last words? Shout outs?
Yes, I’d like to say that everyone I have met within the skimboarding community is genuinely amazing. Shout out to Exile Skimboards for allowing me to be a part of one of the sickest skim companies out there