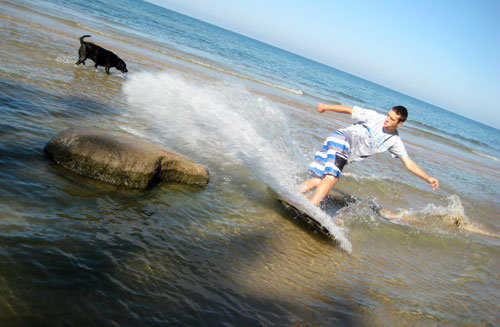 We got the opportunity to talk with Matt Flood a skimboarder
from Syracuse, New York.

Where are you from?
I live in Syracuse, New York.

How long have you been skimming?
I have been skimming for 7 years casually in the summer but started
taking flatland skimming seriously last year.

How is the skim scenen in New York?

The skim scene in New York is a little bit misunderstood. A lot of
people know what skimboarding is just on the wave aspect of the sport
but very few people that I talk to that don’t have camps on my beach
have no idea what flatland/inland skimboarding means. Well still the
majority of people that own a camp on Southwick don’t know what it is
either. So far there are just a bunch of little kids that just ride
Zaps every now and then but theres a few older kids but they just ride
casually too. The flatland scene on Southwick beach consists of my
younger brother Peter Flood, my nextdoor neighbor at camp Arick Hess,
and myself. We reall hae been trying to spread the word of flatland
around the beach. Many people have seen us bring rails and boxes out.
Some people aplaud us and then some people yell at us and try to get us
to get off “their” property. Then it gets dicey but we wont go into
that. This year we hope to make flyers and post them everywhere. Last
year some one stole one of our ramps so I guess thats a start haha.

Where do you skim normally?
I skim at Southwick Beach on Lake Ontario. It’s nice having a camp
on the beach there.

Who do you skim with?
My next door neighbor at camp Arick Hess and younger brother Peter
Flood.

What do you think about the skimboard scene in the northwest?
From what I’ve heard from my friends over there involved in the scene
it’s pretty big and is growing rapidly. Some nasty meia is coming out
of there.

Where have you traveled to skimboard?
Ummm nowhere except Southwick. I got my license over the summer, so
hopefully I plan to travel more this upcoming season.

Where do you want to travel to skim?
Tacoma, Washington and White Rock BC.

What board(s) do you ride?
I currently ride a Dashboard T3 Proto Full Custom.

Do you compete?
No, because flatland skimboarding is basically unkown over here in
New York.

Do you have any sponsors? What companies?
No, well mom and dad if they count.

What other board sports do you partake in?
Snowboarding big time.

What skimboarding goals do you have?
540 shuv it to one footer, and kickflips.

Where do you see the skimboarding going in the future?
I’m sure just as other flatland riders I’d like to see it in the
Summer XGames.

If you were stranded on a desert island that already has a plentiful
resource of skimboards what three things would you bring?
Red Bull, Taco Bell and my Mac Book.

What is the best advice you can to a skim grom trying to get recognized?
Don’t worry so much about sponsors. Go out and have fun. If you really
you are sponsor material they will come to you.