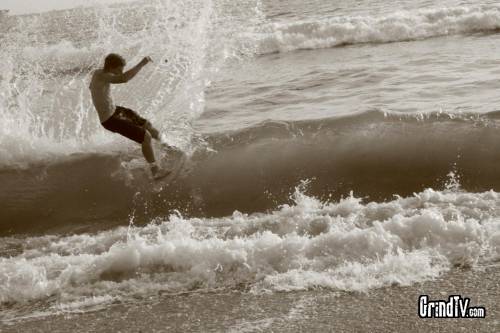 Where are you from?
Los Angeles, CA

How old are you?
18 years old today

How long have you been skimming?
Little over five years I suppose, maybe six

Where do you skim normally?
Los Angeles trashy beaches

Who do you skim with?
Andrew Papa G and Morgan Brazilder

What skim spots do you ride at?
I like to go to places where the waves are a foot high, skim for 45 minutes then take a beach nap.

Where have you traveled to skimboard?
All up and down the CA coast… thats about it.

What board(s) do you ride?
Square skimboards

Do you compete?
Occasionally, otherwise I often disagree with the contest formats etc.

If so, what competitions have you competed in?
Some aliso, deer creek when it still existed, and some balboa and santa cruz…

How is riding for Square Skimboards?
Inexplicable. Dave is a good friend and I am happy to have a sponsorship where I can hang out and party with the owner rather than acll him only when I need something, etc.

How is skimboarding scene in your area?
it is full of misconceptions and college wrestlers getting drunk on the beach and riding wooden boards like everywhere else except there arent enough “REAL” skimmers to provide people with the “REAL” skimboarding… i dunno, its f*cking los angeles

What other board sports do you partake in?
i want to try wake skating soon. skateboarding is stupid. falling due to pebbles sucks. dont surf much i barely swim. OH but snowboarding is fun and i want to get more into that… for sure

What skimboarding goals do you have?
I want to build the scene in my area, start a skim camp and an annual contest (real one) and I would like to compete and take it seriously… I dont need to win just go out there and say “I did everything in my ability to win my heat” and I had fun… fun comes first dudes.

Where do you see the skimboarding going in the future?
Right into the ground…just kidding. I may steer away from the contests and trying to do kickflips and skim wedge to spend some time with the local kids. Start that skim camp and promote a positive scene in the area because people in LA suck too much…

What riders influenced your skimboarding?
OMG. Hard question. Gradys go the f*ck for it attitude and b rothes sorta skateboard influenced skimming and OF COURSE hende’s wraps, FS and BS. Also, hende is the NICEST guy in skimboarding. FACT

What riders are pushing the sport right now?
Paulo hands down. Nobody compares to his desire to push the image of the sport, not just the stuff that makes him money… he’s pushing every aspect possible. He loves skimboarding. You can tell.

If you were stranded on a desert island that already has a plentiful resource of skimboards what three things would you bring?
Hate this question. I’ll say what I wish I could say. My girlfriend (that I don’t have), an assortment of fruit seeds to learn how to grow fruits and maintain that growth… AND…sunscreen? cause I’m a f*cking ginger

What is the best advice you can to a skim grom trying to get recognized?
Never emulate someone in such a way that you lose sight of who you are. skim for yourself and remember there are no pros making thousands of dollars getting btiches and going to hollywood parties for skimming… is that too much for a little 10-year old to understand? Yeah, I suck.

What is your favorite trick?
BS bigspin on a FS liner…popped with maximum cleanliness and stuck mid air to a landing that graces the face of the wave…NOTHING BETTER.

Last words? Shout outs?
Thanks to Dave of course and all my friends who skim, Andrew and Morgan and anybody else who tells me that I don’t suck to boost my esteem… LA