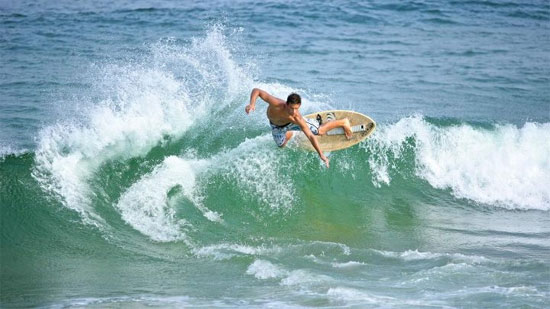 Another chapter in Northeast Skimboarding is coming to a close as the final event in the Northeast Skim Tour’s inaugural season wrapped up in fashion this past weekend. August 4th and 5th was an event held exclusively for those competitors who had enrolled in the complete tour. Competitors received a bracket seeding based upon their season long performance standings, and they were rewarded with a two day adventure to one of the most pristine and fun skim breaks in all of New England.

Competitors and their invited guest group met in Chatham, Ma on the morning of Saturday August 4th not knowing what to expect. But, when Captain Jimmy Wilks pulled his boat up to the dock and hollered from under his hefty handlebar mustache for the all aboard call, all the doubts were left behind.

Saturday saw near perfect conditions on the either side of High tide with a punchy swell and light winds. As the collected crowd settled in the action got going. The Junior men’s division was given a complete round robin format to settle all standing rivalries in the friendliest of manners. The Men’s division was was sporting a larger contingent and depended on an every man skims twice format with bys given to the top 4 ranked Men off the tour standings list. The Women’s and Boys divisions both turned out to single skim formats. But the real focus was on the Tour mantra of High fives and good vibes, as everyone was spreading the stoke.

When the spray cleared and the winds picked up Sunday after the final heat came to a close, the competitors gathered for the final award ceremony of a great season. Steve Taylor had graciously attended acting as an ambassador for both Exile Skimboards and Let’s Party traction bringing with him a slew of products, Vibey clothing sent a handful of excellent products, and shop sponsors Luminate surf and skate of Marshfield MA, Boarding House of Orleans MA, Warm Winds of Narragansett RI, and Zapstix of Seabrook NH contributed quite kindly to the collection of prizes. In the Women’s division Paige Lacey and Mackenzie Nagy skimmed another great heat in their season of competition, and the Jr. Men’s division had a tight season come to a close with Ian Wright of the Marshfield – Ocean Bluff crew coming in 3rd, Andrew Spaulding also of the Ocean Bluff crew edged his way in to 2nd, as John MacMullen a local skimboarder took a dominant season to a fitting conclusion with another 1st place finish. Men’s saw Rob Suzik of Connecticut take 4th overall after a standout performance on Saturday, Mike Dowdell of Rhode Island took 3rd with a smooth consistency, local boy Noah Barmmer continued his list of accomplishments with yet another spot in the finals and a 2nd place finish, and Drew Plourd took the crown as the top dog with his 3rd victory of the summer earning himself the Grand prize of year’s worth of Exile gear!