The King of Skim had his first stage on January 21, 2012 at Praia da Macumba – RJ, with promises of innovation in the method of competition, so that even in Brazil there has never been in this format.

The batteries were divided by heads of keys, where each battery had a target maneuver, that among them were: Floater, Frontside wall of the wave, the wave Backside wall, Aero, Maneuver Giro (shov it, Big Spin, Flip) , Tube.

And these batteries were judged by the competitors, what makes you think it would unbalance the competition, only that was not the case, everyone thought his opponents very well and we had a very hard and honest competition.

This format made ​​the presentation level of skimboarding is high and the audience responded that there registering there and become the King of the biggest party of Skim Skimboard Dollars.

With much effort and work and the Skimacumba Bernado Picorelli (Bzinho), bring to the year 2013 the new KING OF SKIM 2, which will be held on January 26, 2013 at the same venue from its previous edition in Praia da Macumba – RJ. 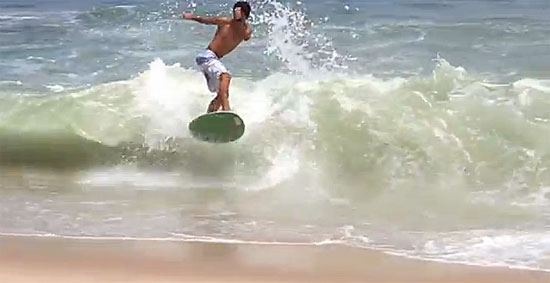