First off, congratulations Kyle. We were hoping that a flatland skimboarder would get involved with us trying to push the sport a bit. Tell us more about your trick?.
I have landed what flatland skimboarders named the bigger spin many times, but this has to be one of my biggest. I spent the afternoon building this 12 foot long /4 foot up rail, threw it on my crappy minivan and headed to my local spot to go test it. For whatever reason, I was in the zone, so i just set up the tripod and, thank god, landed it in my first few tries.

That trick looked like it could put the hurt on you. What drives you to still hit big rails and new tricks?
I guess I like a challenge or I love bailing, both come hand in hand.

Is the flatland side of the sport growing? What would help?
Yes and no. There are way more flatland skimmers then ever before, but the core group that has pushed the sport for the last ten years is falling to the way side and there are only a few guys picking up that slack. I think exposure would help the most if you are trying to expand the market. I think on a small scale, just having the older guys pass on their knowledge to the young’ens.

We heard you went to Cabo San Lucas. What did you think of the skimming there?
I was blown away by the sure power of Cabo’s waves. I mean, I’m not saying flatland skimboarding isn’t dangerous, but I am so accustomed to it. Where as Cabo’s bigger spots just made me realize that you better know what’s up when you point yourself at those waves because they are liable to eat you.

You give back to the sport with camps, video, and contests. Is that something you really enjoy?
Yeah, I love skimboarding. It has been a big part of my life growing up and I just want to spread the stoke it gives me to other people.

Tell us more about your skimboard company, Kyda?
Tim Ladner and myself decided to do our own thing two years ago, both wanting a board that could stand up to our riding. We are small, but whatever, we’ve got passion and i think a lot of people are starting to realize that we really care about the sport.

Who would you like to say thank you to?
Big thanks to East Coast Skimboards and Monkey Business for putting on the contest and all my homies at Kyda Skimboards http://kydaskimboards.com 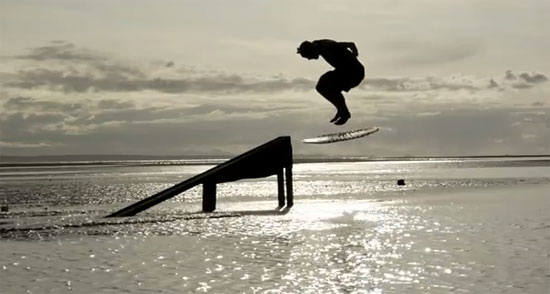