Q. What was the 2014 skim season like for you? What were some highlights?
A. The 2014 season was one of the best yet! I was fortunate enough to travel to Poland, Sweden, Germany and Spain for the European skimboarding cup. Other than that, I managed to get some filming done and learnt a couple new tricks!

Q. What did it feel like to win the European Skimboarding Cup?
A. It felt really rewarding! We started brainstorming for the cup four years ago and finally got things running this year, so winning it after all these years was great. The title of ‘European champion’ sounds pretty cool too! I’m looking forward to next year’s edition and hope I can participate in all the stops this time.

Q. What was your favorite part of the European Skimboarding Cup?
A. My favorite stop of the cup was the Polish Skimboarding Open. It is without a doubt the biggest flatland skimboarding contest in the world. All the Polish skimboarders are super welcoming and the contest is always a good time. What I liked the most about it this year was all the original setups they built for the comp

Q. Where do you want to travel to skim to skim in 2015?
A. In north America I’d love to ride Chambers creek, the virgin river, the wedge and Spanish banks. Australia and the Philippines look amazing too. Maybe something for 2016?

Q. Where do you see the skimboarding going in the future?
A. I’ll stick to what I answered on my rider profile on skimboard culture back in 2009; ‘I see it becoming more mainstream’. The sport is growing in Europe and slowly shaping into a more professional sport. With the European skimboarding cup, new companies, young talented riders and sponsorships I can only see it going up from here. I just hope the sport doesn’t grow into a short lived fad.

Q. What skimboarders have influenced your skimboarding?
A. The skimboarders that influenced my riding the most was the guys from SHHH skimboards. Right after I started skimboarding they brought me along with them and taught me how to hit ramps and do all the basic tricks. Otherwise, I look up to riders like Kyle Lynch, Matt Ratoni, Mike Louie, Richard Docter, Blake Zimmerman and Isaac Thomas. The riding style of Isaac also pushed me to skim faster.

Q. What riders are pushing the sport right now?
A. A bunch of guys! Isaac Thomas, Blake Zimmerman, Adam Balaam, the Bick team, Daniel Preiss, Marek Wolkanowski and Michal Puchalski to name a few. Shout outs to all the Dutch riders killing it too!

Q. If you were stranded on a desert island that already has a plentiful resource of skimboards what three things would you bring?
A. The essentials: drinks, food and friends!

Q. If everyone rode a skimboard would the world be a better place?
A. Not at all! All the good spots would be way too crowded. Things would go the surfer way with local-only skimmer gangs fighting over spots!

Q. What is your favorite skimboarding trick?
A. The good old 360 shuvit!

Thanks again Adrien and everyone should be on the lookout for some new boards and product releases in 2015! 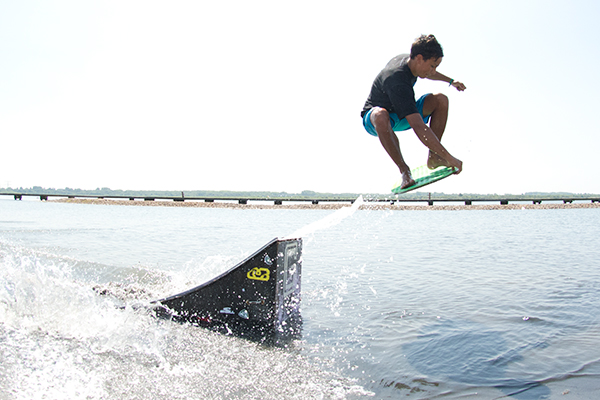