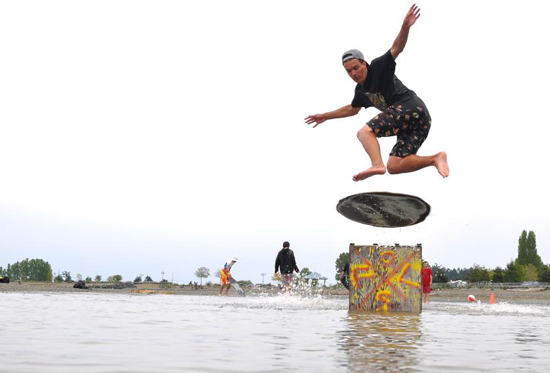 Jesse Derosa is a 16-year old skimboarder from Vancouver Island, B.C., Canada. He has been skimboarding many years as a kid, but for three years now he has been seriously pushing him self on a skimboard.

How long have you been skimming?
Many years as a kid, but I’d say 3 years of the real deal.

Where do you skim normally?
Blueback Beach in Nanaimo, also Parksville and Qaulicum Beaches.

Who do you skim with?
Cam Montrose, Liam Corcoran, Ryan Stewart, Ryan Mountain, Peter Christensen, Jamie Rhodes, Robert Halsall, Josh Long, Chris Backhouse and anyone rider on the island down for a sesh.

What is your favorite skim spot?
Blueback Beach of course! 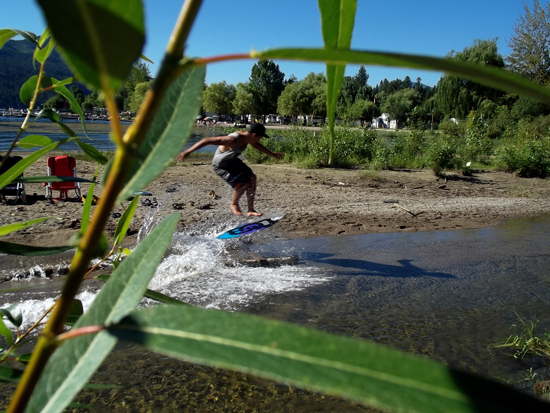 Where have you traveled to skimboard?
Vancouver, Christina Lake, Idaho, Hornby Island, and Tofino

Where do you want to travel to skim?
Washington, Utah, Texas, Australlia, New Zealand, Germany, and Sacramento are all places in mind!

What board(s) do you ride?
DB Skimboards! Medium Proto or Streamline. Used to be into the standards, but now it’s all about that Thomas pro layup! Couldn’t ride anything else. 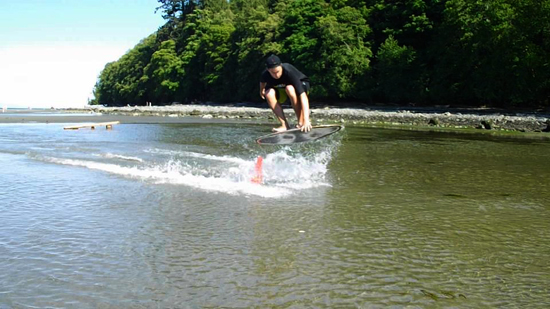 Do you wave skim? Flatland? Both?
Never had the chance to wave skim, I’d love to try it though. Only wave experience I have is Tim Ladner style wave launches!

Do you compete?
Yeah, but not enough. I have competed in the OSBC Skim Comp in Parksville, Vancouver Island, 2011 Island Zed skim jam, 2012 Kyda Slam Jam, White Rock. I placed 1st overall U-18 at OSBC competition. And had to bail early with an injured Ankle at Kyda slam jam.

Do you have any sponsors? What companies?
Nothing! Been hard at work on a video part for awhile now, Companies will be hearing from me very soon.

What other board sports do you partake in?
A little bit of skateboarding, longboarding and snowboarding, but it’s really all about the year-round skim for me. 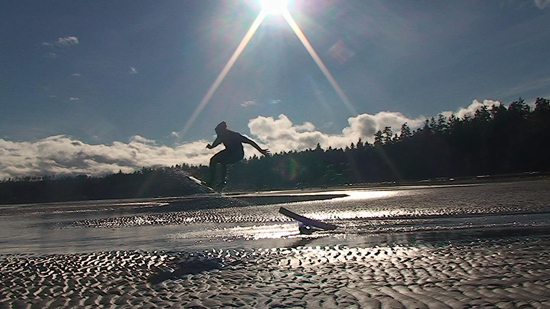 Where do you see the skimboarding going in the future?
Only time can tell, the main goal of all of us out there is to grow the sport and spread the hype. It will only happen if all of us skimmers keep pushing it with videos, forums and magazines.
Honestly, I think the best way to enjoy and support the sport is to grab your board and hit the beach. 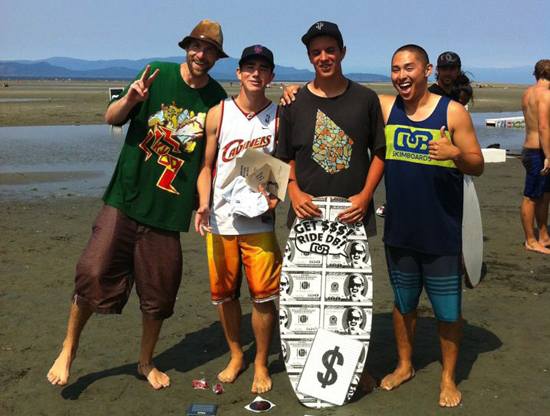 What riders are pushing the sport right now?
Kyle Lynch, Adrien Raza, Tim ladner, Isaac Thomas, Emile Panerio, Adam Balaam, Matt McDonald and all his contributions to the flatland community. Everyone down at the beach enjoying some skim

If you were stranded on a desert island that already has a plentiful resource of skimboards what three things would you bring?
My skim crew, rails and wax

What makes you happy?
Well, skimboarding is pretty fun. Getting tricks and footage is always great, but the main thing is being at the beach.

If everyone rode a skimboard would the world be a better place?
Of course! Although I can’t imagine a world full of salty and sandy-skim guys.

What skimboarding goals do you have?
I’ve been working really hard progressing myself, I would love some sponsors. Progression is a goal of mine, but that will happen just by being at the beach. Which brings me to my third goal, enjoying the beach and skimboarding as much as I can!

What is your favorite skimboarding trick?
Can’t go wrong with a classic BIGSPIN, also back ones, Frontboards, and biggerspins. The thing that has always got me the most hyped are super clean and technical tricks.