The photoshoot took place at Sutherland Park in Kelowna, British Columbia for this article. 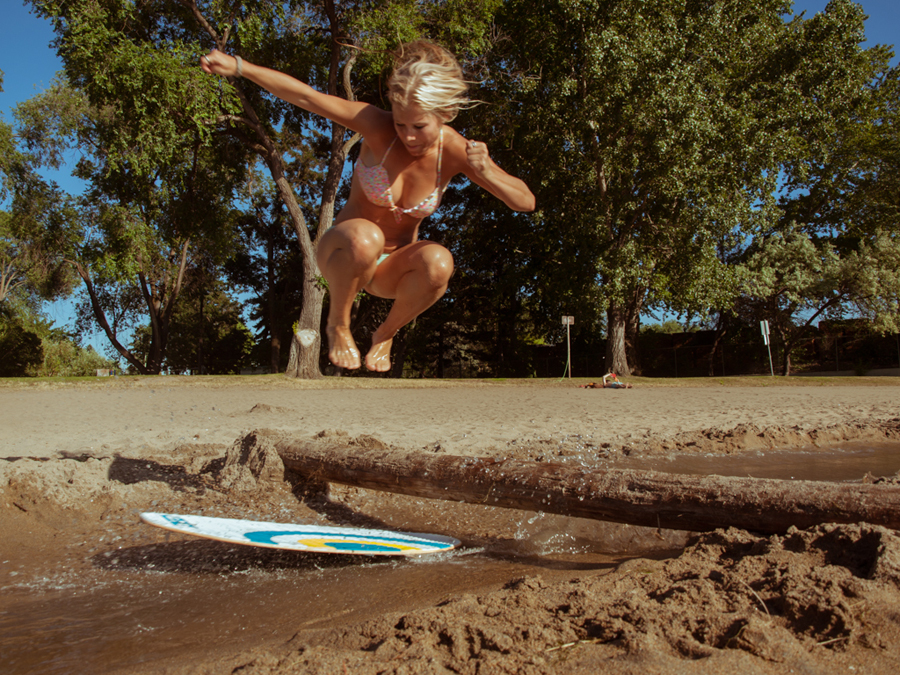 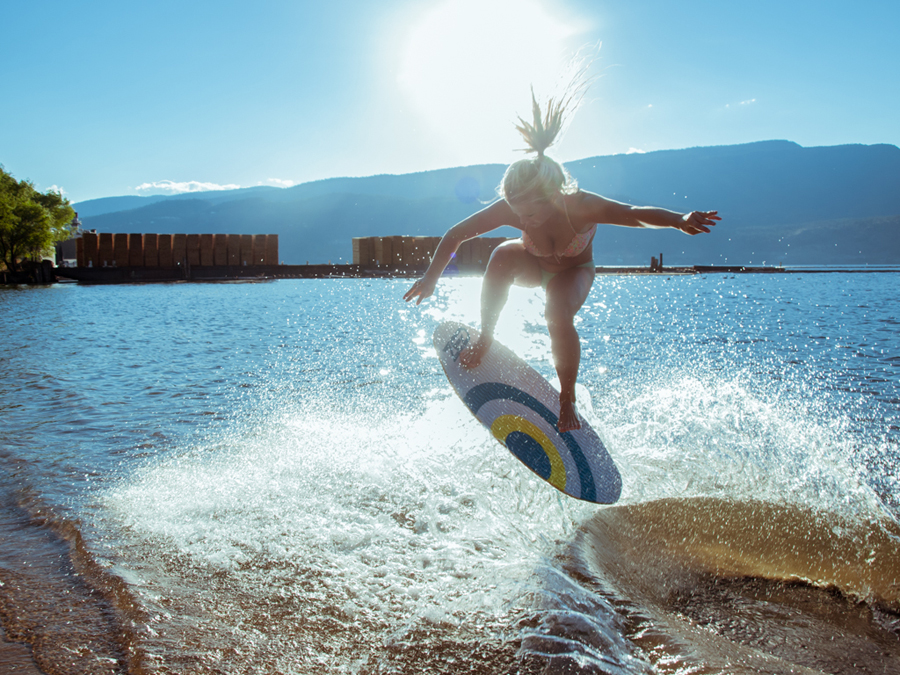 Q: What is the Victoria, BC, skim scene like?
A: It’s very laid back, nobody takes themselves too seriously and there’s a whole spectrum of skill, from little kids trying it out for the first time, to pro guys pop shuving over logs the size of little kids.

Q: How long have you been skimboarding?
A: I started skimming in 2004…so I guess almost 10 years ago now. That sounds like a long time but I’ve never been hardcore enough to translate all that time into pro skill. 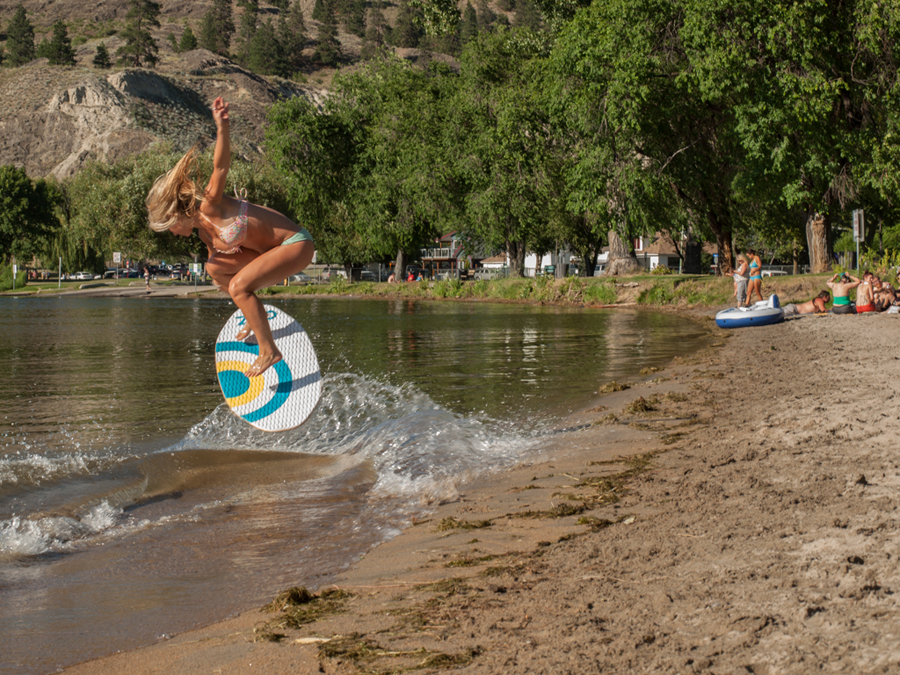 Q: How did you first hear about skimboarding?
A: My brothers used to make their own boards, and ride them whenever we went to the beach…eventually I took one of their boards and tried it out.

Q: Who has influenced your skimboarding style?
A: That’s a tough question. I would have to say my brothers, since they taught me how to do it, but style is pretty self-determined for me. I go with what you feel and if it works, I stick with it.

Q: Where do you normally skim these days?
A: I’m living in Kelowna, BC, right now so I’m getting used to skimming the lake spots. The good places change throughout the summer but my favorite so far is Hidden Beach. 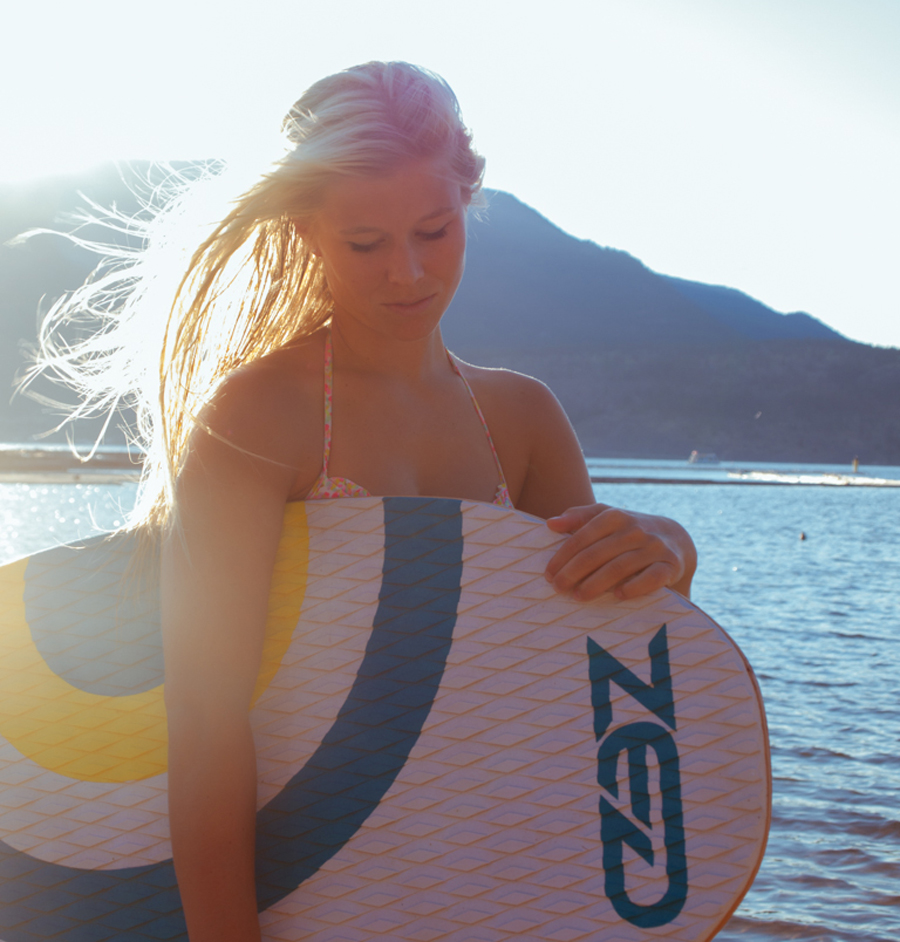 Q: Where is your all-time favorite skim spot?
A: Witty’s Lagoon in Victoria…it’s practically my backyard. You can skim the lagoon, the shoreline or the tide-pools. Pretty unreal.

Q: Have you traveled to skim?
A: No, but I’ve traveled to travel and then skimmed while there. Hawaii, California and Australia & all have been sweet.

Q: Where would you like to travel to skimboard?
A: Poland! I wanna enter the competition there so badly.

Q: Do you compete?
A: Yeah I used to compete, but I haven’t for a few years…British Columbia doesn’t offer much in the way of competitions. Honestly…I’ve always hated competing, I think I must have some degree of performance anxiety because as soon as I know a camera or judge is near I can’t stick the trick I usually stick with ease. I’m sure a lot of people are the same way. 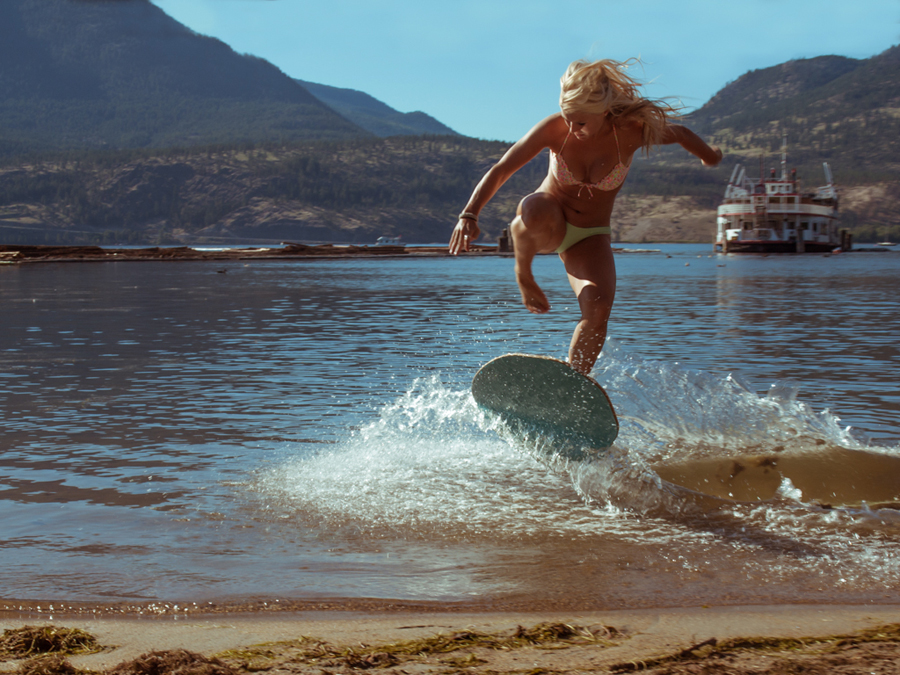 Q: What board company sponsors you? Explain sponsorship.
A: I’ve been sponsored by Zed Skimboards since 2011. Being sponsored by Zed means I’m representing their company every time I skim. Whether that is in competition or just skimming for fun. The company gives you boards, gear and apparel so you want to show your appreciation by advocating for them. Zed is a really awesome company and their boards are amazing quality so they’re easy to advocate for.

Q: As a female sponsored rider, what advice would you give to other young girls wishing to be sponsored?
A: Compete, that’s how you get recognized. You don’t have to be the best, I wasn’t winning competitions when Zed picked me up, you just have to show that you’re stoked on skimming and have potential. In addition to that, go skim with guys. Try and do the same tricks that they do…try and beat them at skimming. The more you standout the more likely you are to get noticed. I have a friend in Kelowna, Kira Byers, who kills it on a skimboard. I think she was sponsored & should be again.

Q: What advice would you give young girls who are dealing with pressure, criticism and negativity on the beach?
A: “Be who you are and say what you feel because those who mind don’t matter and those who matter don’t mind”. That’s the quote I go back to always. If anyone is giving you a hard time don’t let it get to you… you’re on the beach to have a good time so don’t let anyone take that away from you.

Q: What is your favorite trick?
A: 360 shuv. In 2011 I tried for an entire summer to get this trick…for some reason I just couldn’t get it. I got injured so many times in the process but finally it just clicked.

Q: What is one of your skimboarding goals?
A: To compete in a big competition in a different country.

Q: Where do you see the sport heading in the future?
A: It’s hard to say, sometimes it seems like it’s dying off, and then you’ll go to the beach and you’ll be sharing the beach with 15 other skimboarders. There needs to be more promotion of flatland skimboarding in Canada, especially since there are so many unreal spots to skim!

Q: What other board sports do you partake in?
A: Longboarding, pennyboarding, surfing, skiing (if that counts as a board sport) & snowboarding when my friend Pascal lends me her board!

Q: Tell us a bit about the Roxy contest you entered. Is this something you are interested in entering again?
A: It was called Roxy ‘Dare Yourself’ and basically Roxy wanted to see who was daring themselves in their every day life. They chose 5 girls from around the world to go on an epic Roxy adventure. I didn’t win, they were looking for girls who were above and beyond extraordinary, for example a girl named Lexi had lost her leg in a boating accident but that didn’t stop her from living her life to the fullest. Although I didn’t win an ultimate adventure, I was asked to join the Roxy Style Squad so I was stoked that I entered the competition and I would do it again.

Q: What did you study in school, and what would you like to do as a career?
A: I just graduated with a Kinesiology degree. I’m really interested in health promotion, specifically sustainable communities, so I’m planning on doing my masters in that field in Australia sometime in the next few years.

Q: What makes you happy, besides skimboarding?
A: This could be a really long list haha…a lot of things make me happy. There are the obvious things, being surrounded by my friends and family, my boyfriend Nick, sunshine, food & being underwater (especially salt water). As well as, being barefoot, longboarding, laughing, accelerating, tea & being outside.

Q: Tell us something people may not know about you?
A: Haha well, I was born in a car…a baby blue Mazda.