After a slow start the 2013 skim season in the north of Germany the season is finally in full swing and Daniel Prieß is happy to announce that he will be doing a series of videos entitled ‘Unrest Series’ throughout the summer.

Here is part one titled: – First part of the ‘Unrest’ Video Series – 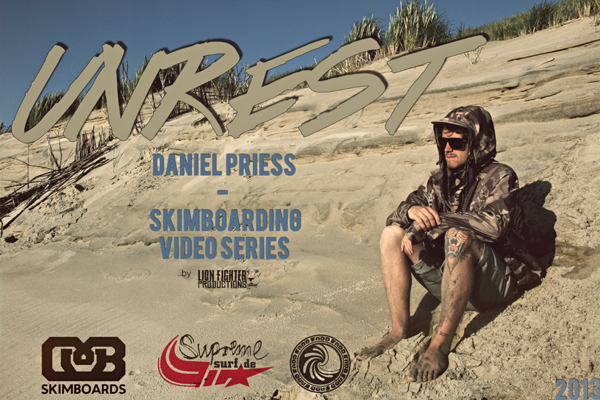 “Being in the water with my skimboard makes me feel alive. There’s not much I can compare to it. Only playing music, playing shows with my band. Aside from that it’s just skimboarding,” said Daniel. “I came back to the island of Sylt in the Norht Sea to film the beach nourishment just like I did last year,” he said.

Turned out that it was too windy so the workers couldn’t flood sand onto the beach.
Instead I had a little session in the foam!

Thanks to my sponsors DB Skimboards, Supremesurf and FÄDD Clothing!
Filmed on Canon 550D and 7D
Music: Designer Drugs – Into the light