Brad Evers is a 34-year old skimboarder from Vilano Beach, Florida who has been skimboarding for 25 years.He normally skims South Side Sebastian Inlet, FL with Dookie, Grosskreutz, Rosenberries, Skim-City Joey, Boardheads2.com and Seabass. 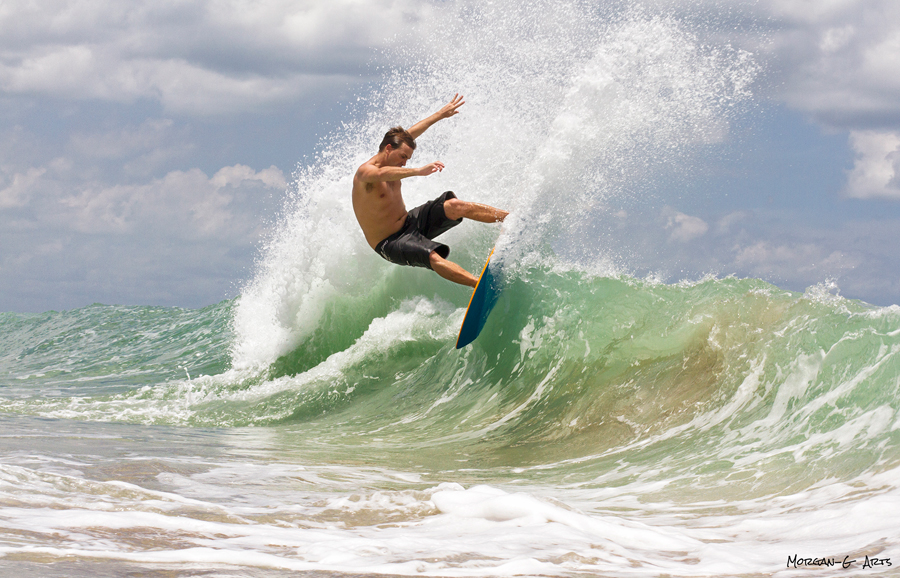 What is your favorite skim spot?
Vilano, when it’s working.

Where do you want to travel to skim?
Need to get back to Cabo, no better place to get humbled.

Do you wave skim? Flatland? Both?
Wave. Flatland wasn’t a separate entity (that I knew of) when I started. Not discounting it now, because that shit is legit. Lexi Hutchings is my motivation to get out there to Sacramento. It looks so fun. 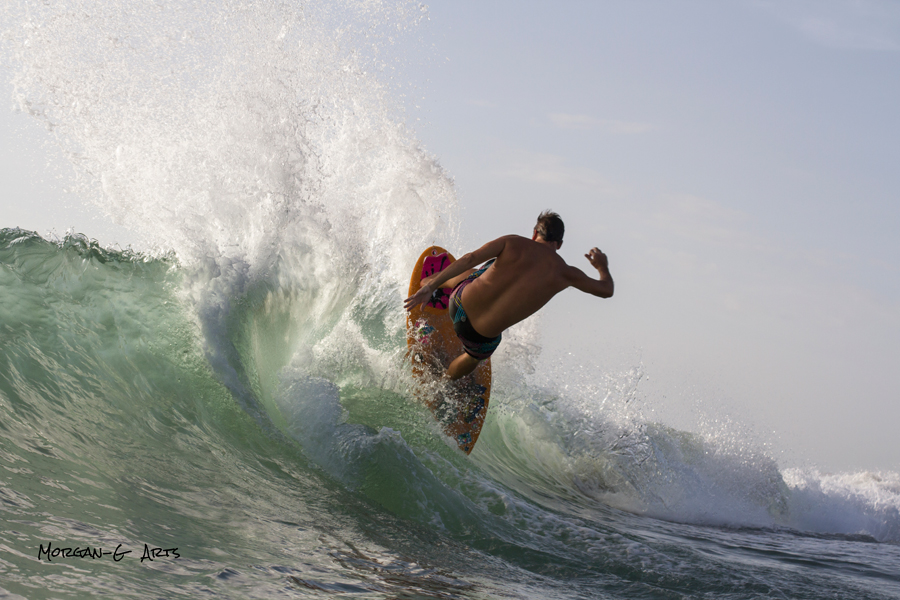 Do you compete?
Not really anymore, only if I feel like it or there are actually waves for a contest.

If so, what competitions have you competed in?
Wow, umm. The ones you might know are: Panama City Beach, Florida Skimboarding Championships (Vilano), Dewey, OBX, Cabo, the Vic, the Slotty, two contests at Sandy Beach (HI), many low key Florida contests.

And what are some of your contest highlights?
Three years in a row top-8 at the Vic world champs (one year got best trick), One year I beat out Geo and Beaker at the 2001 Slotstik at Pt. Mugu in the heaviest shorebreak I’ve seen, but by a judging tabulation error, was awarded third. Didn’t find out the truth until later on. Never really got over that, at least there’s footage of some of those waves. 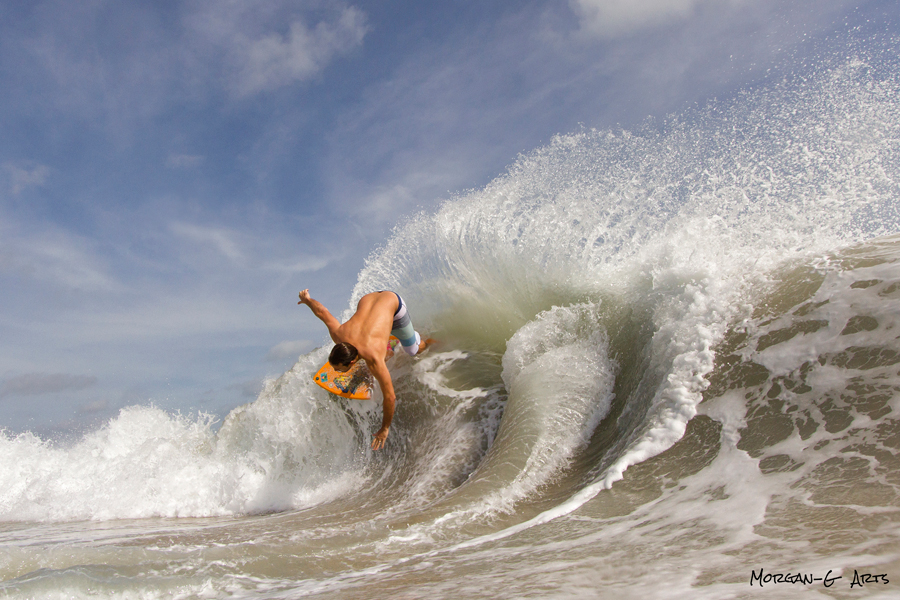 Do you have any sponsors? What companies?
15 years of support from Slotstik, Skim City Greg and Mom. Stints at X-Trak, Zeal Optics, Dragon, O’neill, IndoBoard and Surf Station.

What other board sports do you partake in?
Wake, Skate, Snow, Surf, Tow-Ins and Tech Decks

Where do you see the skimboarding going in the future?
I see the skill level of skimboarding progressing to a point where combinations of moves are what is required to advance through heats, although that’s already the case. Style and power are no longer regarded as highly, and it will take fantastic feats of impossibilities to garner audience and judge’s attention. Competition formats will always be subject to change, but the “best” rider will always prevail.

What riders are pushing the sport right now?
Domke, Conklin and Pruitt have the most light footed, last-minute-move-completion possible on a skimboard. Tim Fulton with late shuvs, and BCS and Koty, with the established style that never gets old. Beaker is exploring new skim territory and is constantly setting the bar for the AARP legion of skimmers. I’m not joking, I dare anyone to keep up with that guy. Aaron Peluso has done more than anyone to get skimboards (and his riders) to the far corners of the earth and promote the sport of skimboard riding, even if for a profit. Skim City Greg is providing the best worldwide skimboard product delivery and support possible.

Riders in foreign countries are blowing my mind and seem legit enough to hang with the boys at the Vic. Just join Facebook and see skim videos from Brazil, Japan, Costa Rica and Africa. It’s astonishing how far the sport has come in 20 years, since the 10th st Bros The Bomb inspired my generation. 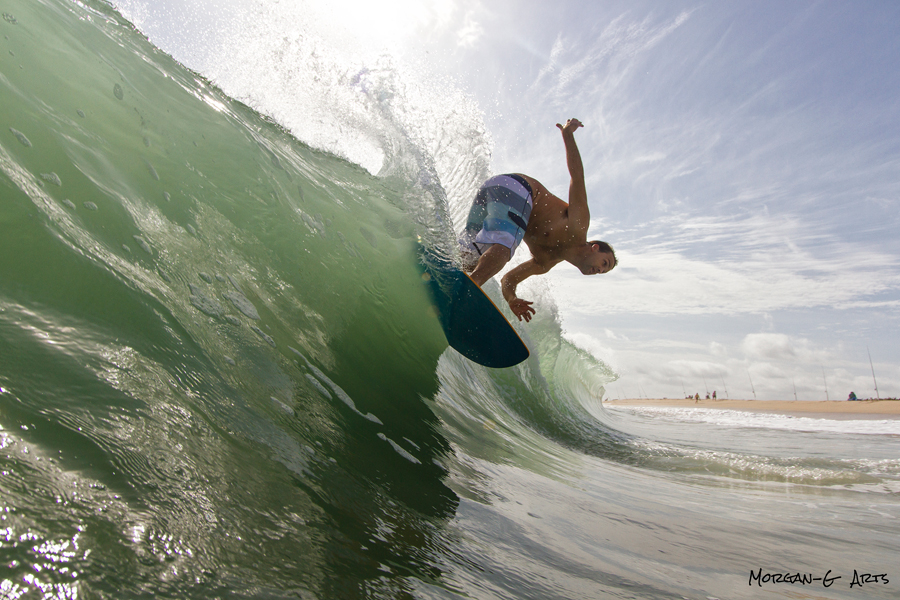 If you were stranded on a desert island that already has a plentiful resource of skimboards what three things would you bring?
Umbrella, video-camera equipped wife and baby, and a pallet containing: a tent, water filter, chair, soap, Vaseline (for nut rash), deck of cards, hammocks, linens, wax, sunscreen, some period newspapers, deceased grandpa’s swiss army knife, some amoxicillin, some ibuprofen, and a small Brad Domke genie to sit on my shoulder and give me skim tips. That’s three things, right?

What makes you happy?
Other people’s happiness.

If everyone rode a skimboard would the world be a better place?
No, that’s ludicrous. People need more than a skimboard to survive successfully. The world would be a better place if people did not try to impart their wisdom on others. Don’t sell me your politics, religion, rituals or black magic. Just treat me like you want to be treated. If you’re going to cut me off, then just bow out of the wave, and let me have it. If you want to jeopardize the safety of me and my family, put your’s on the chopping block first. Don’t infringe on my rights and don’t push your agenda on me. Skimboarding is nice because it involves none of those things, just mutual respect and having fun, cheering each other on and being happy for others that get enjoyment from having a good session, while getting enough to fulfill your own needs. So now that I said that, if everyone embodied the mutual respect that most skimboarders convey, the world might be a hair better.

What skimboarding goals do you have?
My pro goals have been achieved. Now that I’ve retired back to amateur, I’d like to skim until I become incontinent. 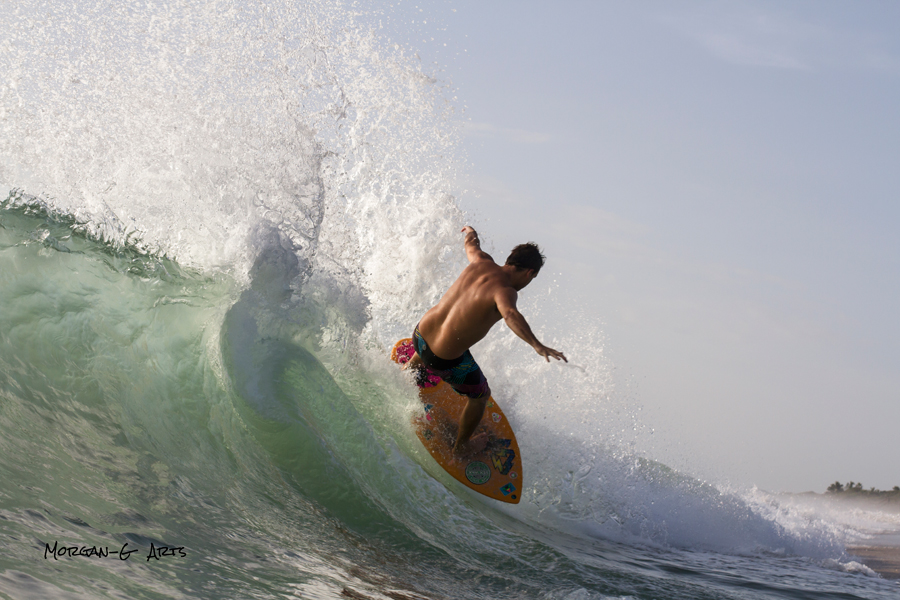 What is your favorite skimboarding trick?
It used to be backside 360 shuvit re-entry airs, but lately being able to try to demolish a frontside wave as critically as Ivan had feels rewarding. It’s a critical move that means more to me than the shuv-its I used to be good at.

I would be remised if I did not specifically give thanks to my mom, the original east coast skim mom. When I was on my way from Florida to Delaware for my first professional east coast championships at age 17, I called her to tell her my friend’s car broke down in South Carolina on I-95 and we were spending the weekend in a hotel until the parts would come in Monday, thus missing the contest. She got someone to cover her nursing shift and made impromptu road trip plans to drive 18 hours one-way, picking us up in SC and trekking us up to Dewey Beach arriving around 8 a.m. in time for Joe Bonk’s opening ceremonies. It was a great weekend with decent waves and I lost only to Beaker, making about $1200 for her efforts. We also rigged up a water balloon slingshot in her VW Eurovan between her driver’s headrest and the rear bench headrest and fired water balloons out the window across the highway median targeting semi truck trailors heading the opposite direction. I got a few, Mikee Nickerson get less. Yeah, don’t do that, you could kill someone.

Skim City Greg and Slotstik Dave and Carol have supported me the whole way and I owe them immensely for sponsoring and believing in me and more so for enforcing the idea that good character gets you further. Taking pride in your work is a lesson they are not aware I have learned from them, but I will always treasure their unwavering support since the commencement of my skimming career.

To all the people I met in Laguna and Oxnard, you treated me, a stranger, as a friend and made me feel at home. An east–side tech outcast in a west coast barrel world, it was amazing the camaraderie I felt in the sport. Scotty and Terry Cress even let me stay on their Oahu couch having only known me through the internet. Talk about aloha spirit.

To my Japanese friends, Tomomitsu Matsushita, Mutsumi Une, Masa and all the other people who made me and Mez feel so loved in Japan, I will never forget that. I cried like a baby when we departed Japan for the US. It was really embarrassing. I still have not gone through that footage and can’t wait to see our adventure 10 years later. I hope to return with my son and wife someday to show them the most beautiful people in the world.

Thanks to Bill Beaker Bryan for escorting an unknown grom to Cabo. Kai Bond, Kuda G, and Kito Peery for helping me when Squid Roe got the best of me and my two front teeth. Thanks Beak for bringing me to Munich for the unveiling of Waveloch’s Bruticus Maxiumus, skim-surfing the Isar River, meeting Tom Lochtefeld, Kelly Slater, and flying down Autobahn with Andy Macdonald in the driver’s seat. Meeting then-snowboard-star Terje Haakensen was nuts and I remember calling home with a demo cell phone from some hot German chick promoting a start-up company called T-Mobile. I still remember skating around with Tony Hawk and Andy Mac in that little indoor street setup behind the wave. I still haven’t gone through those mini-dv tapes either.

Thanks to my baby boy Jacob Benny for bringing me back down to earth and making me live a more healthy lifestyle, in hopes of spending as many years with him as possible. Thanks for making me realize how uptight and impatient work can make a man vs how pacified and forgiving a beautiful innocent child can make him.

Thanks to everyone who instilled the values and work ethic I have today and for making me realize there is more to life than skimboarding. Now that I look back on it, my best experiences were created by other people, kind of weird if you think about it. I hope to be a part of other people’s life experiences. I’ve said my piece, that’s all I have to offer the next generation of people. Be nice. Adios.