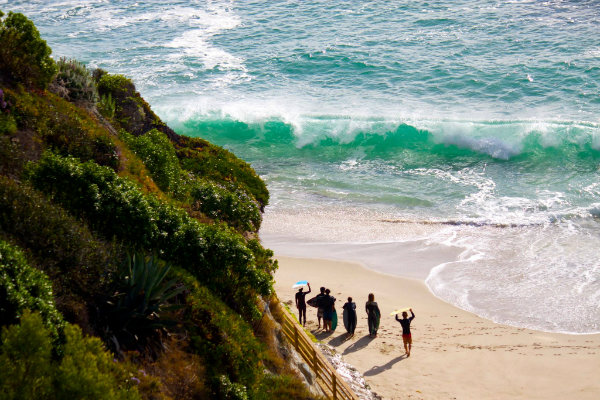 When I began interviewing female skimboarders back in 2012, it was a secret dream of mine to interview Aaron Peluso. He was such a mystery to me back then and although we have become friends since, it only serves as more of an honor to be the one interviewing the man who has contributed so much to what is the sport today. The photos accompanying this interview are by photographer, Tyler Brooks, taken in Laguna Beach, California. I asked Tyler to capture the top ten pros who compete fearlessly in the United Skim Tour, along with new-comer Alexandra Badie, year after year.

Q: What was it like growing up in Laguna Beach?

A: It was a bit different when I was a kid than it is now. Laguna has its roots as a bit of a hippie/artist enclave. These days however, that is less and less. Regardless, it was a wonderful place to grow up and I feel very fortunate to have had that experience.

Q: How many years have you been skimboarding?

Q: To clarify, what are your different hats within the sport?

A: I am the owner of Exile Skimboards, Director and President of the United Skim Tour (UST) and Owner of SkimOnline.com. 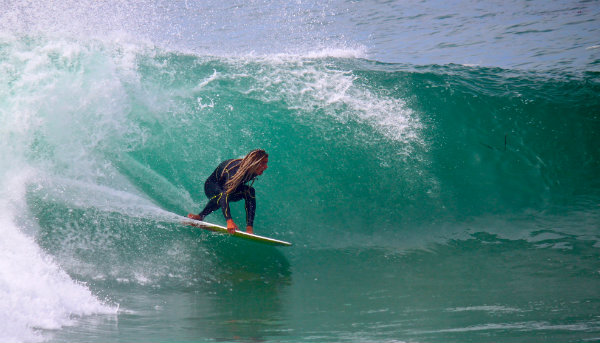 Q: How were you first introduced to the sport?

A: Some of my earliest memories are boogie skimming in Laguna, first on my knees and then standing up. When I was around 7 or 8, I found an old fiberglass skimboard in the dump/BMX track up the street from my house. So I skimmed on that for a while… I later learned that the dolphin painted on the nose of that board was done by Wyland, who is kind of a big deal these days.

Q: Describe your experience as a professional skimboarder.

A: I turned pro in skimboarding in 1993, I think. Back then skimboarding was much much smaller (if you can believe that). With the exception of a few events, there was even less money to be made especially since the same guy dominated about every contest for 10+ years (Bill Beaker Bryan). To skim pro today you have to love the sport. You aren’t doing it for the money. To skim pro back then, you had to REALLY love the sport, cause there wasn’t even the illusion that you might make a few bucks. 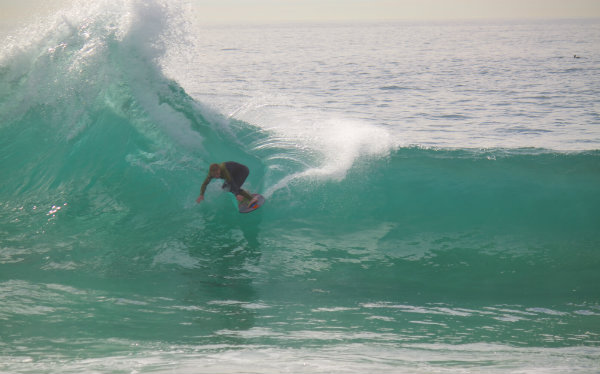 Q: Who are your roots that first sponsored you as a pro rider?

A: I have never been sponsored by anyone. A couple years before I turned pro my buddy started making skimboards for myself, him and a few friends. I just bought boards off him for cost. Later I likely could have been sponsored but didn’t want to ride anyone else’s boards. Chia’s boards got better and better with every iteration and eventually wound up being the basis for Exile Skimboards.

Q: What are some of your competing highlights?

A: I always liked freeskimming better than competing, particularly at Aliso Beach which I would consider my home break. Each year I would do pretty well at the VIC (World Championships of Skimboarding), often somewhere between 6th and 10th but never made it past the semi-finals. In 2001, I was getting set up to launch Exile building test products and such in my garage. Given a little extra motivation, that year I was able to ride the first board I ever built myself (start to finish) to 3rd place at the VIC, which I was pretty happy with. I think it was the next year that I got 4th in Cabo San Lucas. Those were my two best finishes. 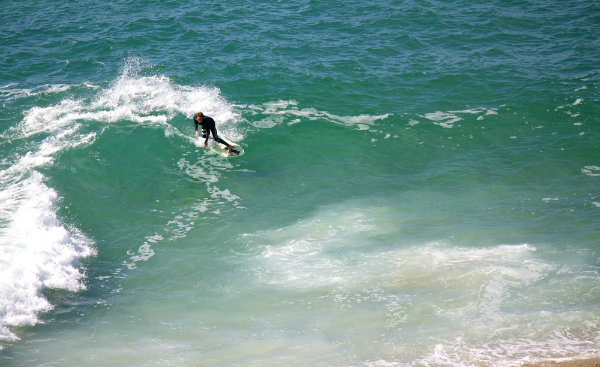 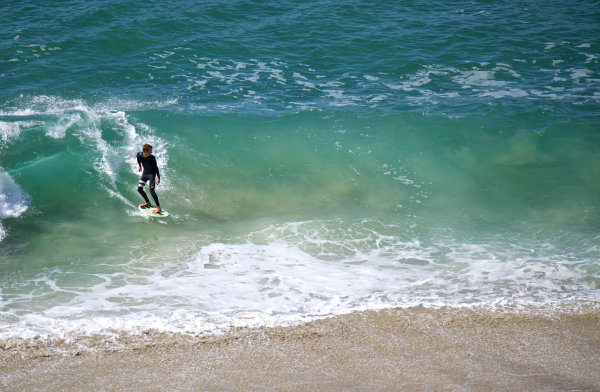 Q: What inspired you to start the board company Exile Skimboards with Andy Chiavetta?

A: Several things really. I wanted to challenge myself to do something entrepreneurial. I saw the boards other manufacturers were making and felt pretty strongly that we could offer a much better product. There was a pent up demand for the product as a lot of people really wanted a “ChiaSkim” but couldn’t get one, so that was an obvious plus. And finally, I saw a lot of room for someone to do more for the sport, and wasn’t seeing anyone step up to the plate. At that point I had run SkimOnline.com for the better part of a decade and had a very significant following. I couldn’t get anyone to even think about paying anything to advertise on what I thought was something that was vastly increasing the popularity of skimboarding (and skimboard sales). I realized that if I had my own skimboard company I would be able to invest directly in the things that would help grow skimboarding.

A: Well, myself, Chia and Ryah Arthur were all grandfathered onto the Exile team from the ‘ChiaSkim team’. The first major pro to join the team was George Bryan. He had expressed some interest right when we first started the company… I cannot recall how long it was before he joined, but it was pretty quick.

Q: Although Steve Taylor is the team manager, what does Exile Skimboards look for when sponsoring a team rider?

A: Of course being a good skimboarder but also being a great person and someone that others look up to. We want to sponsor people who have the right attitude, as well as skill set. 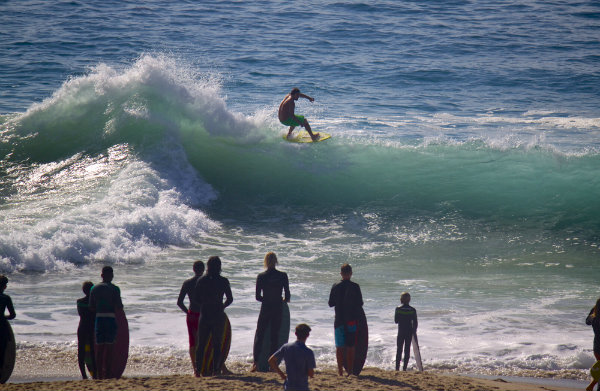 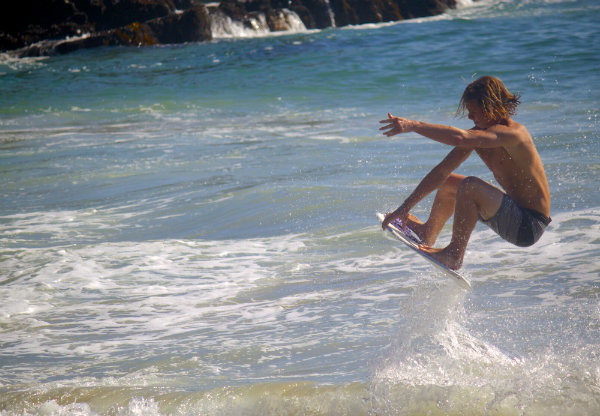 Q: As the co-owner of a devoted company, a lot of groms look up to you. Most kids between ages 9 to 15 are on Instagram; only having this media platform for their source of all things skimboarding. What advice do you have for kids being bullied on IG by other skimmers their age?

A: As someone who has dealt with probably more internet trolling than any skimboarder alive, I can tell you that the best thing is to realize that people who bully/troll often have problems of their own that they need to deal with. They are likely lashing out at you due to some problem with themselves. The best response is not to feel in any way bad about yourself, but to realize that you are reading something written by someone who has so many issues they try and project them onto others. If anything, I tend to feel sorry for people who act like that, because eventually everyone else sees that kind of behavior for what it is. 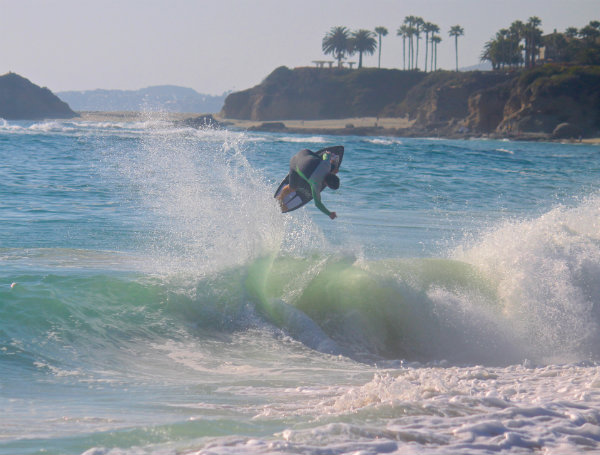 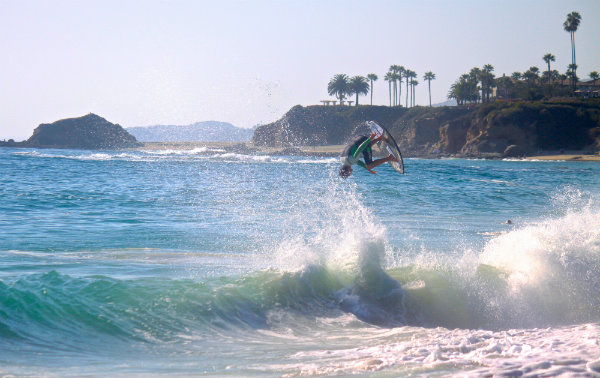 Q: At what point did the United Skim Tour come into fruition?

A: The UST informally started circa 2000 or so as a loose knit point system to unify all the contests. Back then, there weren’t so many contests. In 2006, Trigg Garner (at Victoria Skimboards) and I worked together to formalize the UST as an official non-profit with a board of directors to oversee the tour. We quickly brought Bob Smetts at Zap Skimboards on board to work under one banner for the same cause.

Q: With co-founders Zap Skimboards and Victoria Skimboards resigning their Director and Officer positions in 2012, where do you see funding coming from to expand and take things to the next level?

A: Well, hopefully they will both decide to jump back in at some point. It’s important to keep in mind that we went through a pretty serious recession which combined with the BP oil spill made skimboard manufacturing… let’s just say “highly stressful”. Hopefully as things improve economically they will consider getting involved again. That said, we are very happy to have CMNTY involved for the second year in a row and more and more we see opportunity for even more companies to get involved.

Q: Who is part of the decision-making when it comes to the UST rulebook?

A: Almost everything the UST does is discussed amongst all the directors, including any modifications to the UST Rulebook. 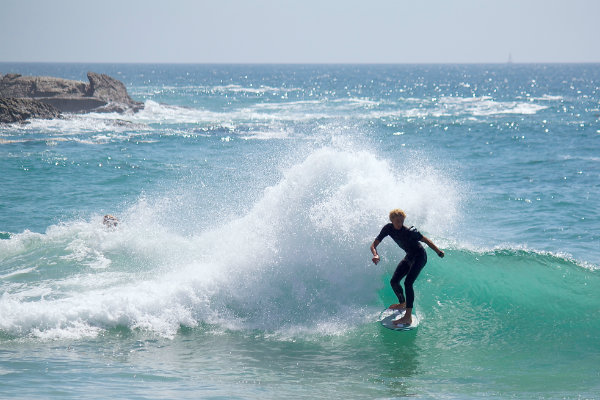 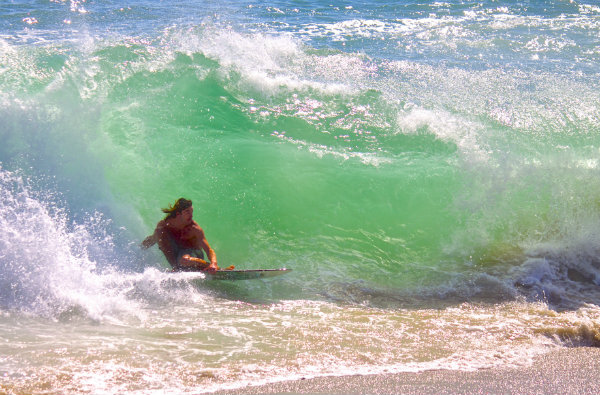 Q: One country I would love to see a UST stop in is the Philippines. Where globally would you like to see the UST represented, besides Brasil, Mexico and America?

A: I think the Philippines would probably also be my next best choice for a UST stop. There is a huge scene there and with no event in Asia nor Australia it is a big gap in the tour. Unfortunately, funds are quite limited and I don’t really see how a large chunk of pros are going to be able to get to say Sununga and the Philippines in a given year. Given the wave quality at Sununga, I think my vote is going to remain to continue and hopefully expand that event for the near term.

Q: If money were not an issue, how would you envision the pro tour?

A: It would look a lot like the ASP tour. 3-4 week waiting periods at the absolute best spots in the world with the absolute best riders. Dedicated professional judges. Live streaming. The works… Know anyone with a few million bucks to spend on skimboarding?

Q: Haha, I wish! When I look back on my life, one thing that will stand out is contributing to the introduction of pro women ranking in 2013. What motivated you not once, but twice to contact me for assistance and officially make it happen?

A: It has been remarkable to watch how the introduction of the pro women’s division has increased participation amongst females in our sport. My thought was that if simply creating a pro division could result in that much increase in participation, perhaps a proper tour could do even more. The timing seemed right for a variety of reasons to start things off and I am pleased with how it went. 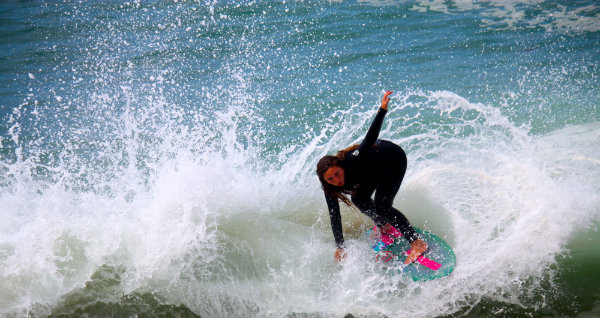 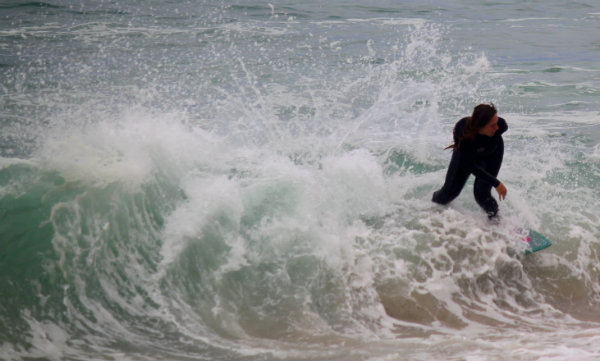 Q: What fuels you to give so much to the sport?

A: I like seeing things done right, so where possible I try to make it so.

Q: You recently got married, congratulations! Will there be little shredders on the horizon for Paulo Prietto’s children to compete against one day?

A: The mini Priettos better watch their backs!! ☺

Q: Besides skimboarding, what makes you happy?

A: I like travelling and experiencing different cultures. Skimboarding has been great in that respect as I have had many opportunities to not only visit far away lands but also to meet up with my skimboarding brothers in those lands and really experience how they live. That has actually been one of the best perks to being so involved in this sport.

Q: That is amazing and a perk I would love to experience myself. As we come to the end of this interview, tell us something people may not know about you.

A: Morgan Just has never beaten me in a skimboarding competition. (haha take that Mo!)

Q: Thank you so much for doing this interview with me, Aaron. Any last words? 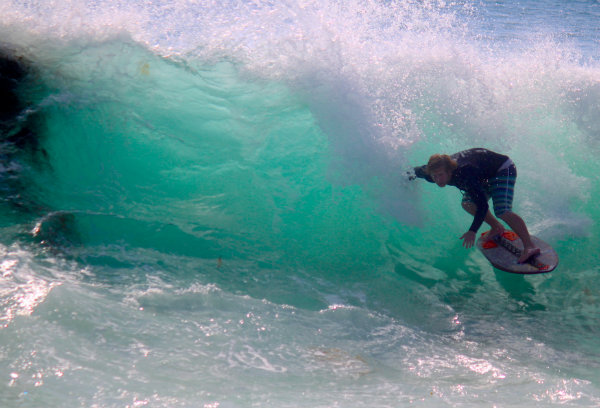 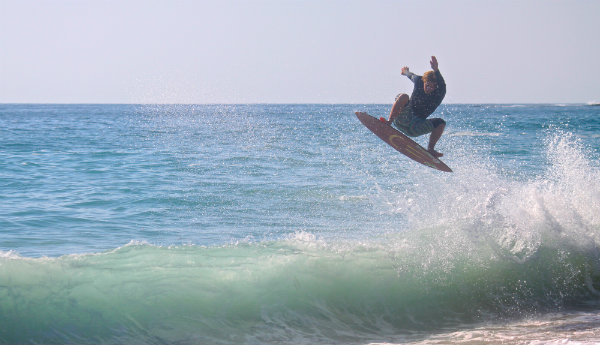 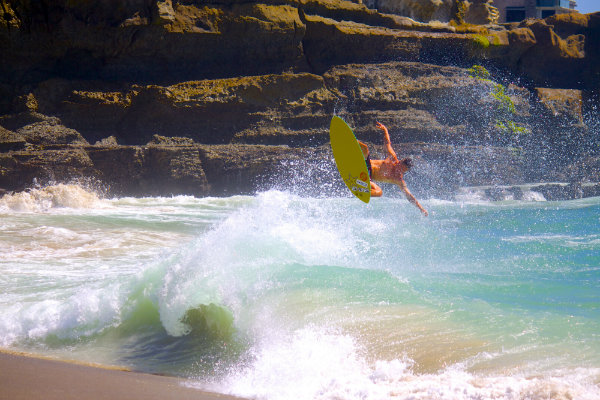