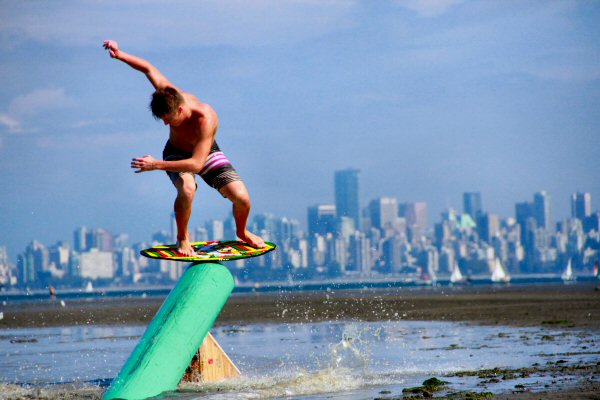 Q: Skim style?
A: Definitely a looser style. I don’t skateboard but I surf so it’s a kind of hybrid of those two.

Q: Which riders have influenced your skimboarding?
A: Roberto Gonzalez and John Minns from Kayotics were huge influences when I was starting out which was around 2006. In the past couple of years, however, my influences have been Kyle Lynch, Tim Ladner and PD from Skull Skates.

Q: Describe the Vancouver skim scene?
A: The Vancouver skim scene is this sort of segregated scene split between Wreck Beach and Spanish Banks. Although there are other beaches in the Lower Mainland like White Rock and Boundry, I consider those separate from what I consider the Vancouver scene. Spanish tends to be the beach where more of the technical riding goes down. Because of the lack of access to Wreck (lots of stairs to get down to the shore) almost all rail riding is exclusive to Spanish Banks.

Lots of young kids progressing as well as tourists and people trying skimboarding frequent Spanish and keep the beach busy. On a summer Sunday evening its not uncommon to draw a crowd when we bring some of the bigger rails out. Wreck is more of an exclusive spot, frequented by a core group of riders that are there most of the summer. It’s more flatland oriented, and charging waves is a great past time of Wreck, and it’s nice because everyone knows everyone and it’s the only beach you can sit down and have a beer and a fire going once you finish your session.

Q: Can you skim year round in Canada? Wave ride?
A: You can skim year round, although it’s cold and the spots are reliant on tide. In the winter the low tide switches to the evening, which leaves the opportunity to get some fantastic sunset sessions in. Wetsuits, are a must. Wave riding, I think there are some hidden spots on Vancouver Island but I can’t say I have gotten to those yet. 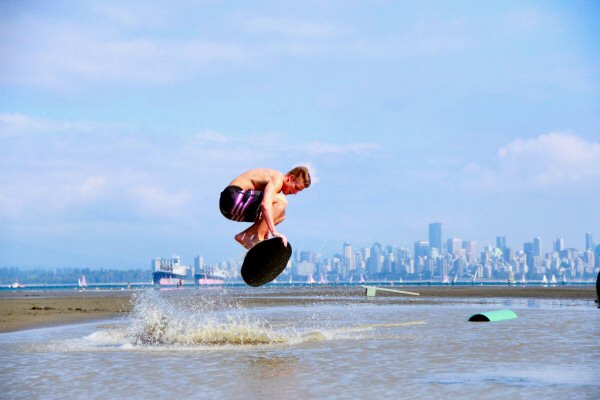 Q: Who is pushing the sport in Canada?
A: Tim Ladner is the best rider in Canada right now. Kyle Lynch has unfortunately stepped away from the skim scene in the past couple of years, and his absence is definitely felt. The Kayotics guys don’t ride as much as they used to, but Minns and Roberto are still fantastic riders. I feel like the mechanics of skimboarding has progressed slower and slower each year and now we are waiting for the industry to progress as far as we have come tech wise. I would like to think I am one of the people trying to help the media out in Vancouver grow, and I think Skull Skates is making good progress on taking the skim industry where it needs to be.

Q: How long have you been skimming?
A: The first time I tried skimboarding I was 10 years old. I have been taking it seriously for about 6 years.

Q: What is your favorite trick and what’s the next one to tackle?
A: I am super flatland oriented! so my favourite trick is grab variations with as much pop as I can get. So 3 shuv grabs, big spin double grabs, those kind of things. And I would love to improve my rail game, and get more switch tricks down.

Q: Where is your all-time favorite skim spot?
A: I love most spots. But if I had to pick my favourite, nothing beats a full day at Wreck Beach in the heat of the summer.

Q: Have you traveled to skim?
A: I have managed to skim in Washington, California, Saskatchewan, most of the Gulf Islands, Vancouver Island, Kelowna and the interior of BC, and Cuba.

Q: Where would you love to travel to skim?
A: I really want to go to Utah and Texas, the scenes there look very cool and it’s just somewhere I would love to get to. Sacramento as well.

Q: Do you like wave riding?
A: I have tried it, and to be honest I wasn’t very good at it. I don’t think I really had enough time or the optimal conditions to try it the right way on my first time but if I ever find myself moving to LA, I will definitely be picking it up. 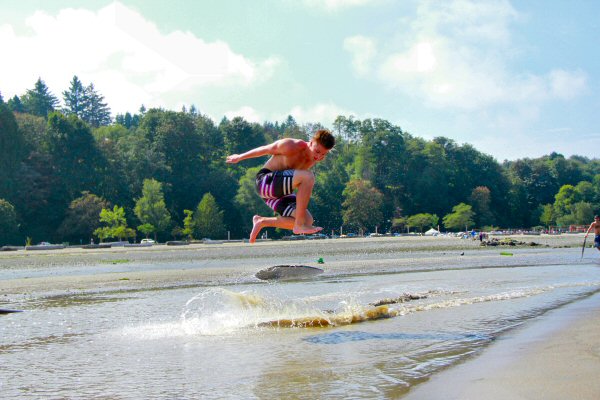 Q: Describe your contest history?
A: I don’t ride in too many competitions, I probably should more, but the last one I rode in was the 2013 DB Pro/AM. I won the flatland heat and placed 5th overall.

Q: What are some of your 2014 skim goals?
A: I am currently in talks about producing a full length film with Skull Skates. I have been wanting to make this film for close to 4 years and I think I have the resources and skill to do it justice this year.

Q: For groms wanting to be sponsored, what advice would you give them in getting noticed?
A: Focus on having something second to your riding that makes you stand out. Unless you are insanely good odds are you will never get sponsored on skill alone. You have to make yourself a package deal, meaning you have to offer something outside of your riding that makes your time worth the companies time. In my case I am definitely not the best rider on the team, but my “Package Deal” is my technical background when it comes to producing media, specifically video.

Q: Skull Skates have been putting on a skim jam every summer on Texada Island, BC. Describe the event for those interested in attending this year.
A: Ah yes, the Texada Skim Jam. It is honestly one of the most relaxing, fun skim events I have ever been to. 2 nights of camping with the whole Skull Skates team, fires, drinks, dinners and a whole lot of community spirit from the Texada locals. It’s on July 12th and 13th this year!

Q: Have you given skim lessons before?
A: I have worked with Windsure for 5 years, essentially it’s a watersports adventure camp for kids. I have always taught the skimboarding camps and I think I have had over 500 kids go through the camps with me there. So yes, a lot of lessons.

Q: What do you think about the flatland scenes in America and Europe?
A: Well DB has a firm hold on the American market, and they do a good job and do a lot for the sport. I like the diversity of the American scenes, it seems like each location has its own style and idea of what they want to progress which is really cool. I think Europe, specifically Poland is really where I wish the North American scene was at. But I think it’s so huge in Poland because the country is land locked and it’s the closest thing they can get to the sort of mainstream water sports like surfing. It’s also very localized in Europe, which allows it to get big, fast. Can you imagine if every skimmer in North America lived within 2 hours of each other? It would be huge!

Q: Do you have any ideas on how to bring the continents together more?
A: More travel and more money. Sponsors need to start working together to bring the individual scenes together through competitions or media. And to do that we need more money to travel. I can’t drop funds to get to the scenes I want to, I am a poor student. But I really want to go to the Cypress Creek Skim Jam, so I have a dilemma that stems from a lack of cash.

Q: Where do you see the sport overall going in the future?
A: I think that’s the question a lot of skimboarders are asking themselves these days. If you want my take, I honestly don’t think the sport is going to go much further without a serious change in the way companies operate. The sport is still grass roots, there is a lot of room for it to grow. But it needs help, it won’t get there by itself. 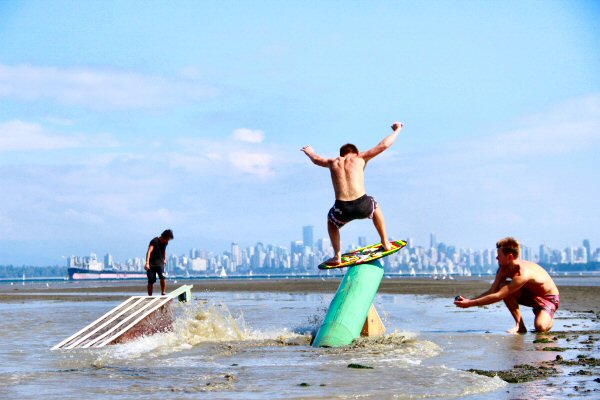 Q: Who is your #skimcrush?
A: Lexi Hutchings is an incredible skimboarder. She is also incredibly gorgeous so I think it would have to be her. Also Zed Skimboards skimmer Anna Penn. If I had to pick a guy skim crush, didn’t John Minns used to male model?

Q: Besides skimboarding, what makes you happy?
A: Lots of stuff makes me happy! I really enjoy surfing and would love to get better at that now that I am into the 20s. Summer is just a great time in my neck of the woods. I am sitting on my deck in the sun at the moment typing this and I would be lying if I said I wasn’t pretty happy right now.

Q: What do you study in school, and what are your career aspirations?
A: I am a 2nd year film major at SFU Contemporary Arts. I get to study what I love and had the fantastic opportunity to direct a short film this year, which screens April 17th at the Goldcorp Centre for the Arts. My career aspirations involve me working in the film industry, hopefully directing or somewhere in the camera department. I am young though so we will have to see what happens.

Q: Last words? Shout outs?
A: Thank you Kelli for initiating things like this interview. Sometimes these types of things are thankless but it’s really what the sport needs. I would like to give a shoutout to Tim and PD at Skull Skates, Pablo Corry in Victoria missing sessions with him, and my brother Nick Maranda who provided all the photo eye candy that you see in this interview.