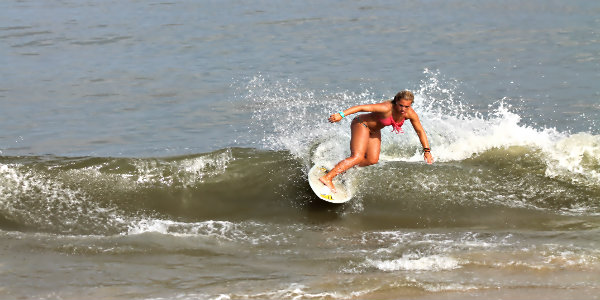 Q: From?
A: Originally from Silver Spring, Maryland, but I now live in Rehoboth Beach, Delaware, USA.

Q: When did you start skimboarding?
A: I started skimboading when I was 8 years old and started doing contests at 11.

Q: What is your favorite trick?
A: Back side wrap to front side liner.

Q: Where do you normally skim?
A: Out front of Alley Oop on New Orleans Street or the Delaware State Park Beaches (Key Box, South Side, State Line, Naval Jetty). 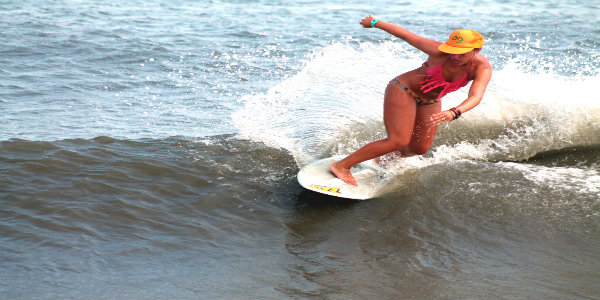 Q: Describe the skim scene in your area?
A: I work at Alley Oop in Dewey Beach, where most of the skim camp counselors and I are around the same age. There are a lot of skimmers in Delaware and some pretty good spots to skim in the area. Mostly everyone in the area knows about skimboarding whereas in other areas and States that I have skimmed in; I have noticed a lot of people on the beaches had never even heard of skimboarding.

Q: Where is your favorite skim spot?
A: My favorite spot is Naval Jetty on a good day. I love riding backside liners and the waves break perfect for it there.

Q: If you could travel anywhere to skim, where would you go first?
A: To the west coast. I have never been and am sooo stoked to be finally competing in The Vic next summer. I have heard the waves break differently there and I cant wait to ride the spots I see in some skim movies and online at The Vic all the time. 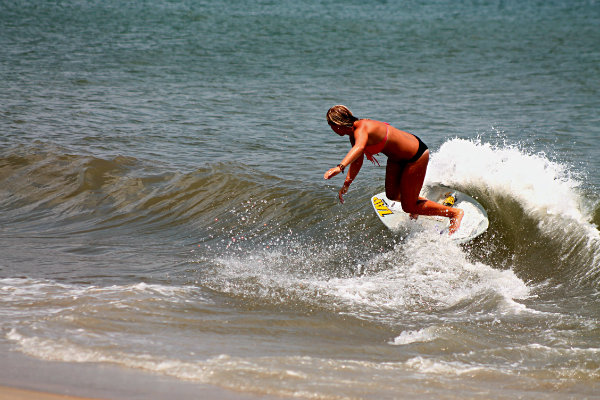 Q: Who are your role models and who have influenced your style?
A: Growing up going to Alley Oop skim camps and living in Dewey Beach, I would have to say my role models were my skim counselors and older riders at contests in Delaware. Watching and learning from Jason Wilson when I was little helped me learn techniques to improve in skimming. Nowadays, working at Alley Oop, skimming with other counselors has helped me progress as well. Watching Gordy Levine, Daniel O’Connor and Lucas and Sam McCoy skim during work has helped me grow as a skimmer not just physically but mentally. They all are pretty good at tech and watching them helps me learn new tech tricks I never knew were really possible. Now and then they also help me with new techniques or push me to learn new tricks.

Q: Describe your history with competing?
A: The first contest I ever entered was the East Coast Championships in 2006. I received fourth. In 2007, 2008, and 2009, I won first in the Skim USA Tour in the Girl’s Division. In 2010, I moved up to the Women’s Division, and placed 8th overall. It was kind of a struggle moving up to the Women’s Division (ages 15 and up). There were only girls that are either a few years older than me or a few years younger than me so at first the transition was hard. However, after a few years I was able to improve. In 2011, I was third in the Women’s Division and in 2012 I finished second. This year I won first in the Women’s Division. In the 2013 Tour, I won fourth at the Melbourne, FL Contest, first at the South Side Shoot Out Skim Contest, first at the Jersey Skim Bash, second in the OBX Skim Jam and fourth in the World Championship. Next year I will be participating in the United Skim Tour as a Women’s professional.

Q: You placed 1st in the Women’s Division overall on the Skim USA Tour. Congratulations! What was your experience like competing at some of the events on the tour?
A: It’s always so much fun being able to visit the different skim spots on Tour and seeing where my friends from different areas skim everyday. The Contest in Belmar, New Jersey this past summer was a lot of fun. Ed Hayden, a skimmer from the Master’s Division, made everyone feel at home when we all skimmed at his local spot. I tried dropping in on a half pipe at the skate session after the first day of the Contest and ate it a couple times. It kinda hurt but it was still pretty fun. 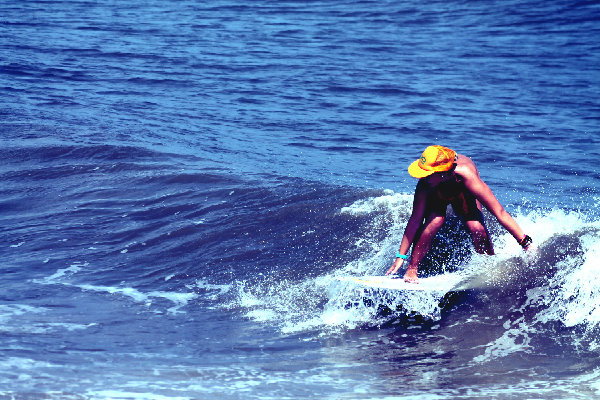 Q: Are you sponsored?
A: Yes, I do have a few small sponsorships but nothing huge. Alley Oop Skim Co. has sponsored me for several years now. This past summer one of my co-workers at Alley Oop started a skim company called Sodel Skim Co. that I ride for as well. I also have a small sponsorship from Big Fish Grill Restaurant, which is a restaurant I work at in the summer in Rehoboth, DE. I hope to eventually become sponsored by a board company or traction pad company and continue meeting skimmers from all over.

Q: Tell us about being a skimboard instructor over the summer?
A: Being a skim counselor at Alley Oop is probably one of the best jobs I could have. I get to be on the beach all day and teach kids what I love to do. I skim with them and teach them techniques on how to make skimboarding easier for the average beginner and basic tricks to slightly more advanced skimmers. Working with the AO crew is always a fun time. It’s all about entertaining the kids that come through each week; whether it’s Full Camp (Mon-Fri) or Mini Camp (Tues-Thurs), we are always goofy and playful with the kids. The food that we get to cater the full camp is bomb. There is a local Mexican restaurant that caters one day of camp and brings us tons of chicken and plain cheese quesadillas along with chips and salsa.

Q: Sounds like a cool summer job! You would make a great candidate for being on the Skim USA Team in 2014. Tell us why you deserve the opportunity?
A: I feel that I would be a great candidate because I have the skill level to skim in different conditions. I’ve never gotten the opportunity to travel – I’ve never been off the east coast. Money is kind of tight right now, considering I am in my second year of college at University of South Carolina, so finding travel money is hard.

Q: What are some of your skimboarding goals?
A: Some goals of mine are to keep constantly improving as a skimmer. Getting better at tech, meeting more skimmers, having a great time and learning as much as I can about the sport. 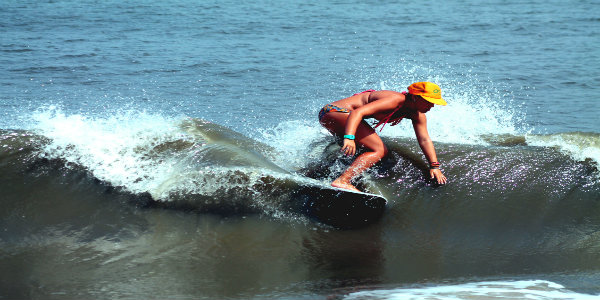 Q: Besides skimboarding, what makes you happy?
A: I love having a good time. Good vibes and friends make me happy.

Q: Nice! What do you do on the off-season, when it is too chilly to skim on the east coast?
A: In the off-season I go to the University of South Carolina in Columbia, SC, where I’m currently majoring in Insurance and Risk Management and Finance. Go Gamecocks! I joined the sorority Delta Delta Delta. I am looking forward to an amazing year with all my new sisters and friends here at USC. One of my good friends from college has a house in Myrtle Beach. On some weekends we go and stay at her place with a few friends. I usually bring my wet suit and board with me and try to get some practice in. The conditions are definitely nothing exciting, but it’s still fun to get on my board and practice tech. During winter break I usually snowboard a lot. I go to places around southern Pennsylvania and western Maryland. I usually try to hit up a few contests too.

Q: Love your competitive spirit! Tell us something about yourself other skimmers may not know about you?
A: I love to snowboard. Sometimes I like it more than skimming. I’m trying to get more involved in the sport. I have entered a few contests in the past. Last winter I won first at the Whitetail Rail Jam. I hope to continue to improve so I can enter the Transworld Competition at Seven Springs this winter season.

Q: Awesome, good luck Ellen! Do you have any shout outs before we end this interview?
A: Thanks to everyone who supports and funds me! Without all the help I wouldn’t be able to skim in contests or do the Skim USA Tour. Thanks to Skim City Gregg and Skim USA for putting on such great and fun contests! Also, to my friends Emily Simmons and Julie Lopatka who always are there to help film. 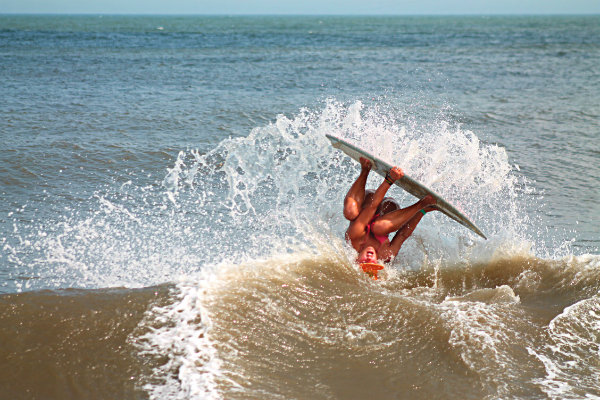