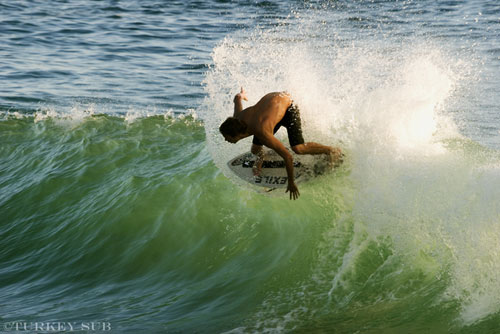 We got the opportunity to talk chat with Exile Skimboards team rider Tommy D’Eliscu.

Where are you from?

I am from Newport Beach, California

How old are you?

How long have you been skimming?
I have been Skimboarding for probably around 6 years.

Where do you skim normally?

I usually skim around Balboa, my back yard is the Wedge, so I find myself going out there most of them time, other than that, I usually skim the Balboa Pier and anything in between.

Who do you skim with?

I usually skim with some of my buddies from around where I live, like Turkey Sub and Cam Oden or if I skim the Pier there is always a group of groms that are there to skim with.

What are your favorite spots?

Umm… I love Cabo, I enjoy skimming big waves in warm water, but you can only go down there so many times a year, so I would have to say that my favorite spot to skim is Wedge, it provides fun waves even on days when its not pushing a sider, so you get a little bit of everything year round.

Where have you traveled to skimboard?

I haven’t traveled that much to go Skimboarding, I have been to Cabo six times I think… I have been over to Florida twice, and I have been up North to Santa Cruz a couple of times, but I don’t really consider that traveling.

Where do you want to travel to skim?

I would love to go skim over in Europe, like France and Portugal, I would also love to go down to South America and skim Chile and Brazil, I have been seeing crazy Pictures of that Sununga Sider in Brazil and am just dying to go there!

What board(s) do you ride?

I ride Exile Skimboards, I have two that I am riding right now, The first one is a Small Paulo 3/4ths and its super fun! It gives you a lot of float and is great for Wedge. My other board is a Extra Small 3/4ths and it has to be one of my Favorite boards, its super small and extremely maneuverable, but yet it still floats enough to make it out to some bigger waves. I love riding the Extra Small on liners, in grabs the pocket of the wave perfectly.

I compete every now and then, I only try to go to contest that I think will be fun, or I try and go to Contests with some UST points in them, but there are only a hand full of those over here on the West Coast.

If so, what competitions have you competed in?

I have competed in the Victoria Championships the past 5 years, I think… I have done the Exile Oktoberfest that last 3 years, the Santa Cruz contests and a couple of Florida Contests, I just got back from the Overhead Surf Shop Contest, that was a really fun contest to be at! Waves were not that good, but the people and the environment was fun!

And what are some of your contest highlights?

I can’t say that I have to many Contest Highlights, Umm… I was pretty excited when I won the Oktoberfest for my division, it was like claiming my home break as mine, Haha, I was also happy when I went up to the Santa Cruz Contest for the first time and ended up winning that one as well. But that is all from doing Amateur Contest, I haven’t done very good yet as a Professional, so I guess I still have some learning to do, I guess a highlight of mine would be, that pretty much every Skim Contest I have done since I turned Pro I am always in a Heat with my Good Buddy and Fellow Team Rider Paulo Prietto, he always makes the heats more relaxing, cause we kind of just skim for fun, even though he is kicking my ass the whole heat! Haha

Do you have any sponsors? What companies?

I have a couple sponsors, Umm Well my main one is Exile Skimboards, which I can not even put into words how awesome it is to be a part of their team, its pretty much a dream come true. I also ride for a Local Surf Shop in Balboa called Main Street Surf Shop, and I ride for Atwater Clothing and a little Mexican Restaurant in Balboa called Great Mex.

What other board sports do you partake in?

I skim mostly, but when the skim sucks, I find myself strangely addicted to Body Boarding, I know Skimboarders and Body Boarders don’t get along, but I used to Body Board before I started Skimboarding, so I guess its just stuck with me. I also surf on occasion, but only if the waves are good, or I am really bored.

What skimboarding goals do you have?

I don’t really have any Skimboarding Goals for myself, I would like to win a Pro Contest sometime in the Near Future, but I am not dreading over it. I try as much as I can to help the sport grow, by either taking pictures or doing some video work, to get some more movies out there and that is a big goal for me, just to keep the Skimboarding public excited on the sport itself and to try to get as much recognition for the sport as we can.

Where do you see the skimboarding going in the future?

I don’t see the sport of Skimboarding skyrocketing any time soon, but to say that it is not growing at a fast pace would be a lie, within the last couple of years, I have seen more coverage in newspapers and more interests from outside parties/companies than I have ever seen before, there are so many people within the Skimboarding Industy also trying to get the sport out into the world as much as possible. People like Aaron Peluso (Exile Skimboards – SkimOnline) Derek Makekau (ForeverSkimMag) David Levin (SkimboarderMag) and even you guys at Skimculture.com, you are all trying to progress the sport visually to the world and I think it is helping more than we think it is.

What riders influenced your skimboarding?
I would have to say the Exile Team in its entirety has influenced me, going on trips with them, you get a little knowledge each time, its a real eye opener to see what is possible in the sport of Skimboarding. I would say some of the key people who influenced me are; Steve Taylor – He was a big reason why I am on the Exile Team, he would always give little updates to Aaron on how my Skimboarding was progressing, Paulo Prietto and Grady Archbold never stop nagging me to go on bigger waves and do more tricks on waves, its almost a work out to skim with them because they are always trying to get my to push the limit on every wave, I would be no where without those two behind my back. And of course Aaron Peluso for giving me a chance to be a part of Exile Skimboards, whenever I am Skimming and Aaron is filming he will always give me little hints or suggestions to make my style flow better or to do certain tricks or maneuvers on a wave, it has been a huge influence to me. To always trying something new and different. I would be hopeless and not were I am today without the help of those guys and the rest of the Exile Team.

What riders are pushing the sport right now?

There are so many riders trying to push the sport right now it would be almost impossible to name them all, but the main people I see pushing the sport are people like Paulo Prietto with his Skim Camps and his ability to show up to almost any contest and make it in the Final Heat. Aaron Peluso, Steve Taylor, and Hank Snapp at Exile Skimboards as well as Tex Haines and Trigg Garner over at Victoria Skimboards are continuously putting out Skimboards all over the world. Bill Bryan being able to come off of a bad contest season last year and a hurt back, and end up winning the UST this year. Also Bill and George Bryan continuing to make there 10th Street Bros. Skimboarding Movies. And the list goes on…

If you were stranded on a desert island that already has a plentiful resource of skimboards what three things would you bring?

Hmm… This is a hard one… I would probably bring; A pair of Boardshorts, A Bucket of Sun Screen, and a Huge Boom Box to blast 80’s Music all day and all night.

What is the best advice you can to a skim grom trying to get recognized?

I would have to say, just go out and keep Skimboarding, try to develop a new and unique style and you will definitely get recognized. Contests also help to get recognized, but don’t be focusing all of your energy on doing contest, and definitely don’t be bummed if you don’t do good in contest, I see so many kids that don’t do good in contests, but completely destroy it at Skimming and are getting sponsored for their Free Skimming Ability.

What is your favorite thing about skimboarding?

I don’t really have a Favorite thing about Skimboarding, its all fun to me, but if I had to pick one thing, I would say, to watch people progress, standing on the beach and skimming with your friends, cheering them on when they get a good ride. That always is fun to me.