The Rio Open 2011 was held in january, at Macumba Beach, in Rio de Janeiro. Skimmers from many parts of the state of Rio de Janeiro showed up at the beach and made it a super fun contest.

In the first day, the waves were small but some skimmers even managed to get some barrels and also land some tech tricks . By the end of the day, the wind picked up and made the conditions really bad as you can see in the video… The semifinals and the final heat were postponed to the following day in the morning, so that the skimmers could skim some decent waves.

Zona Skim would like to thank Bernardo Picorelli, Skimacumba and the sponsors Ogio, Red Bull, Drop, HB, Globe and Estácio for making this contest possible! Congratulations for the winner Lucas Gomes and to all the other skimmers who joined the contest and that were killing it at the beach, that was a really good contest, we hope to see more like this one in the future! 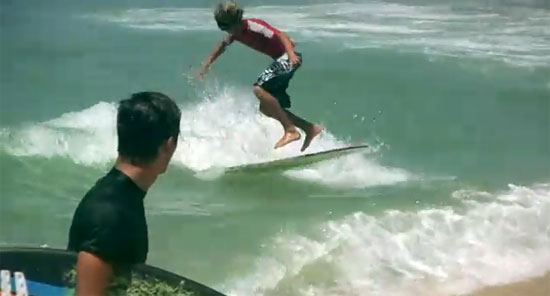