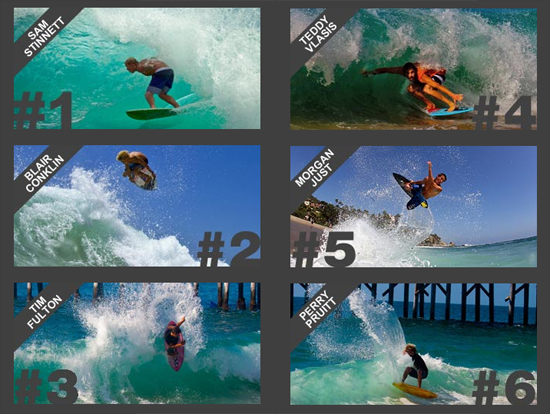 Update from the United Skim Tour

The 2012 United Skim Tour season came to a close last weekend in Newport Beach CA. Going into the event, 1st and 2nd place were already locked up by Sam Stinnett and Blair Conklin following early contest season domination. It was a good thing too since both riders tweaked their knees in the week of epic swell before the event. Sam chose to sit Oktoberfest out while Blair skimmed, but not at his usual level of aggressiveness. The UST wishes both a speedy recovery.

So the battle was set for the remaining spots. Austin Keen picked up the win at the event but strong performances by everyone else near him prevented him from picking up much ground. That was more or less the story of the event as spots shifted by one or two, but with no huge moves. Perry Pruitt picked up second place at the event and landed in sixth place on the tour. A fine showing for his rookie season. Brandon Sears took third and in doing so held onto 7th place on the tour while Jake Stinnett placed 4th, just low enough for Austin Keen to pass him with a win in the final event. Teddy Vlasis took fifth at the event which was enough for him to jump into fourth ahead of Morgan Just. Morgan dropped back to 5th after an early exit due to a contentious man-on-man heat with the eventual contest winner Austin Keen. Tim Fulton took sixth which was enough for him to hang onto his third place UST spot. Meanwhile Jason Wilson exited early but was still able to pick up enough points to land himself in the top 10.

The competition was tight this year. In looking at the UST standings it is worth noting that spots three through nine were all within 1000 points of each other. That means that for these guys the difference could come down to their performance at a single event (good or bad performance). If Austin hadn’t hurt his back after Cabo, he wouldn’t have been counting three zeros… If Brandon Sears would have made it through his first heat in Cabo or Southside… If Morgan would have picked up those few precious points against Austin last weekend…

But those are all “what if’s”. In the end, the points are the points. All these guys will be back again next year to take another swing, and we can’t wait to see what they have in store.