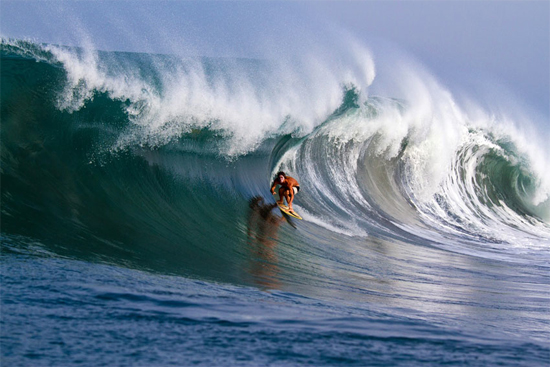 Floridian Brad Domke, pictured here, has called his sport ‘skurfing’ since he was 13. If you’ve never seen the kid doing his thing, picture Chippa Wilson jacked up on goofballs with far more limb-flailing (a necessity for maintaining a line) and a finless, disc-like board under his feet.

Yup, you read that right – he’s finless. There’s no mods here – the skim Brad surfs on is the same one he runs onto during skim contests. So, how’d he make the jump from shorepound to lineup? “When I moved to the east side, I kept getting barrelled on a surfboard and I was like, I’ll just go out there and do it on my skim,” he says. “So, I’d paddle out on my skim. It’s very difficult, but when you catch a wave and you’re finless, it’s such an organic feeling.”

But, what about riding waves that are of more consequence. Like the one pictured here at a known (and often feared) Mex beachie? “Riding those waves with no fins, it’s such a different feeling. When you’re drawing the line, you really have to pinpoint the spot on the wave before you even get to it. On a big wave, you’re going so fast down it, you gotta be used to the feeling of going fast without fins. Holding my line and my rail, I remember it felt like the most muscles I’ve ever used, my entire body, just for surfing.”

Adrien Killing it at the SkimPark